Bonington was originally built by W.J. Simms Sons & Cooke Ltd, at a cost of £642,000, for the Nottingham College of Art. 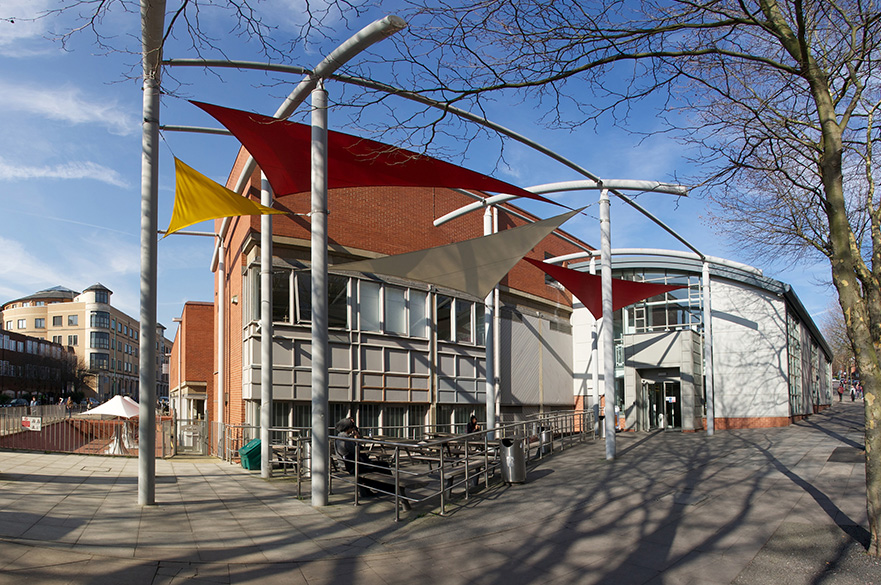 The internal design was in part a direct creative response to the influence of Sir William Coldstream’s 1960 National Advisory Council report on Art Education.

The building was opened in 1969 by Her Royal Highness the Duchess of Kent. It is a labyrinth by design to “promote social interaction”, the three-story building still offers extensive and state-of-the-art facilities in the support of art and design education in Nottingham. At the heart of the building is a purpose-built exhibition space, The Bonington Gallery – one of the oldest art galleries in Nottingham.

Bonington is situated on the corner of Shakespeare Street and Dryden Street. The unusual cobbles on Dryden Street itself were laid by Italian Prisoners of War during World War II.

The building, constructed of Midland Red brick with rooftop glazing, was designed by the Nottingham City Architects Department (David Jenkin/Peter Spring (an alumni of The College of Art)/ Bernard Walker) to house the then school of Town & Country Planning along with the Departments of Fine Art, Fashion & Textiles as well as bespoke exhibition space and a lecture theatre. There was a second phase for The Students Union and included a hostel (now known as Sandby Halls of Residence). Much of this second phase has now been demolished and replaced with the stunning new Byron Student Union Building.

Terraced housing, with basements, covered the site before the construction and the ground sloped by a challenging 6.1m from North to South down to Shakespeare Street. This slope was utilised to deliberately create a multi-level building (some rooms with much natural light and some, designed as photography studios, with none). The design kept the overall height of the new building ‘low rise’ so as not to constrain future development of the surrounding area. The building’s early design was inward looking in the tradition of Larkin and Guggenheim with balconies and ‘shelves’ projecting inwards so that activities would be in full view of each other thus promoting social interaction. There were concerns about ‘environmental control’ and so the layout that we see today was finessed from the early designs by, former Nottingham College architecture student, Peter Spring. Some of the design elements, such as sunken courtyards, are a direct nod to Cambridge University buildings which were being constructed at the much the same time.

The ‘free design’ shape was evolved to allow for future extensions and growth, at different times, of particular departments. As much wall space as possible was created for art display purposes. Similarly, top lighting with areas of patent glazing was introduced to allow for natural illumination without a loss of wall space.

The building was extensively refurbished in 2006 and reopened by local boy and fashion designer Sir Paul Smith.