James Woodford RA (1893 – 1976) was an English sculptor. His works include sets of bronze doors for the headquarters of the Royal Institute of British Architects and Norwich City Hall; the Queen's Beasts, originally made for the coronation in 1953, and later replicated in stone; and the statue of Robin Hood outside Nottingham Castle. 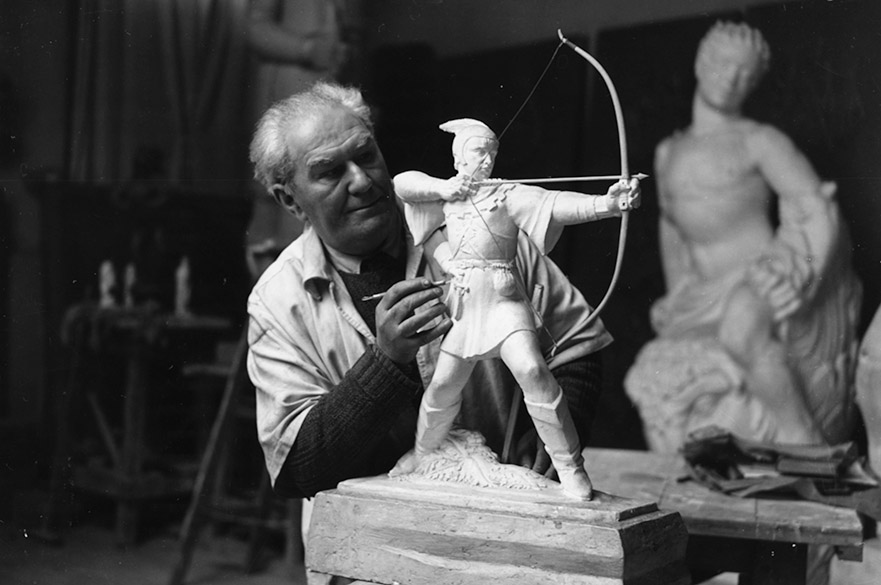 James Woodford RA (1893 – 1976) was an English sculptor. His works include sets of bronze doors for the headquarters of the Royal Institute of British Architects and Norwich City Hall; the Queen's Beasts, originally made for the coronation in 1953, and later replicated in stone; and the statue of Robin Hood outside Nottingham Castle.

Woodford was born in Nottingham on 25 September 1893. His father was a lace designer. Woodford started studying at the Nottingham School of Art, but his studies were curtailed when he enlisted during the First World War. After the war, he continued his training at the Royal College of Art in London and was Rome Scholar in from 1922 to 1925.

Woodford designed the bronze doors of the 1930s extension of the Liverpool Blind School in Hope Street. The doors were later transferred to the new Blind School when it moved to Wavertree, a suburb of Liverpool.

In 1934 Woodford created a monumental pair of doors for the headquarters of the Royal Institute of British Architects at 66 Portland Place, London. They each weigh one-and-a-half tons, the deep relief designs showing the River Thames and various London buildings. He also made figures on the exterior columns, interior ceiling plaster reliefs depicting the main periods of English architecture and various building trades and crafts, and stone window-pieces depicting building through the ages. Four years later he made a set of 18 sculptured roundels for the six bronze doors of Norwich City Hall, each depicting a manual trade that had been practised in the city.

He created the sculpture of Ceres, the Roman goddess of agriculture and grain crops, that sits above the portal of The Corn Exchange, Brighton, which was installed in 1934.

Woodford did some decorative work for the liner RMS Queen Mary, carving wooden screens and designing bronze uplighters for the cabin class smoking room. Another commission around this time was for the facade of the fashionably decorated Good Intent restaurant in Chelsea, where he carved large wooden reliefs of a mermaid and two seahorses.

During the Second World War, Woodford served as a camouflage officer with the Air Ministry. After the war he created a small number of war memorials, most notably for the Court of Honour of the British Medical Association building in Tavistock Square.

For the coronation ceremony of Queen Elizabeth II in 1953, Woodford made a set of ten plaster sculptures of the Queen's Beasts, each 6 feet (1.8 metres) tall to be placed at the entrance of Westminster Abbey. He went on to make a set of Portland stone replicas that an anonymous donor presented to Kew Gardens in 1956. They now stand on the Palm House Terrace.

In the 1950s Woodford made a set of reliefs representing the four elements for the Lloyds building in Lime Street in the City of London. They were placed very high up; Arthur Byron in London's Statues (1981) describes them as "barely visible." Following the demolition of the building they were installed on a wall at street level as part of the landscaping of the Willis Building on the same site. In 1951 he made the bronze statue of Robin Hood that stands near the gates of Nottingham Castle.

As part of the sculptures commissioned for the building of Nottingham Council House and along with fellow students, Joseph Else, Charles L J Doman and Ernest Webb; James Woodford created Prosperity, a striking Art-Deco, female holding a sword. At her feet are a mother and baby, and a female holding the fruits of the earth. This group is at the Long Row East corner, (best seen from outside the Yorkshire Bank).

In 1962 he modelled a new version of the royal coat of arms for use on major public buildings such as courts and embassies for the Ministry of Public Buildings. The Times said it was "more shapely than the old design and displays the Lion and Unicorn with greater vigour".

He was elected an Associate of the Royal Academy on 2 March 1937 and a full Academician on 27 April 1945. He died on 8 November 1976. Richard Arm from the School of Art & Design worked on a project with Nottingham City Council in 2015 to recast the Robin Hood statue to be gifted to our twinned city of Ningbo in China.