William Hallam Pegg (1865 – 1946) was born in Nottingham and trained as a lace draughtsman and dresser at Nottingham School of Art during the 1880s. 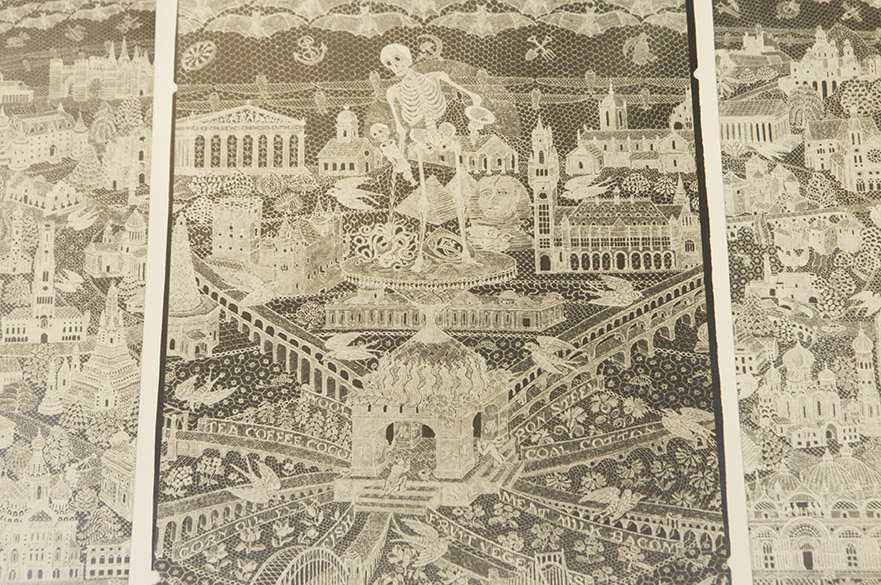 Pegg became a well-known designer of lace for curtains, collars and fans, later teaching at the school himself. His designs were bought by leading lace companies in England and on the continent and his work often featured in journals and exhibitions. Notably, Pegg won a Silver Medal for a design for lace exhibited at the l’Exposition Universelle et International held at Liège in 1905: this now belongs with the rest of the Pegg Collection to the Lace Archive at NTU.

Dominated by a skeleton that seems to have stepped into the scene from a Medieval danse macabre, the design incorporates Biblical imagery, political symbols and representations of the flags and buildings of the countries attending the doomed conference. Other – yet to be re-discovered – designs by Pegg indicate his left-wing political beliefs: an intricate design for lace, enigmatically titled Whither? and described by one newspaper critic “as a symbolical drawing in process”, was exhibited at Nottingham Castle in 1937. Another newspaper report commended the design for “its craftsmanship, even though it be propaganda”.

After his retirement, Pegg continued to exhibit his work, locally and nationally. However, rather than executing designs for lace, the latter part of his artistic career was devoted to watercolour painting, recording local landscapes such as Caythorpe Mill and depicting local craftsmen at work. This group of paintings are reminiscent of the ‘Recording Britain’ project organised by Sir Kenneth Clarke during the Second World War. Several of Pegg’s paintings were exhibited throughout the 1940s at the Royal Academy and at least two survive in the collection at Nottingham Castle Museum. One entitled A Dying Craft (1941) depicts Charles Carlisle, the last frame-worker in Caythorpe, while the second shows his daughter at work on designs of her own, surrounded by examples of lace, including some of her father’s designs.

Following Pegg’s death, the City of Nottingham Education Committee acquired the William Hallam Pegg Collection for the College of Arts & Crafts. Writing to his widow in 1947, the Chairman assured her that Pegg’s collection would “have an honoured place in the library […], and be a constant source of information and inspiration to the art and craft of lace making in this, the national centre of the lace industry.” Today, preserved in the Lace Archive, the work of William Hallam Pegg continues to inspire future generations of designers and artists studying at NTU.