Thinking on our feet: Understanding interactions between mental tasks and balance coordination 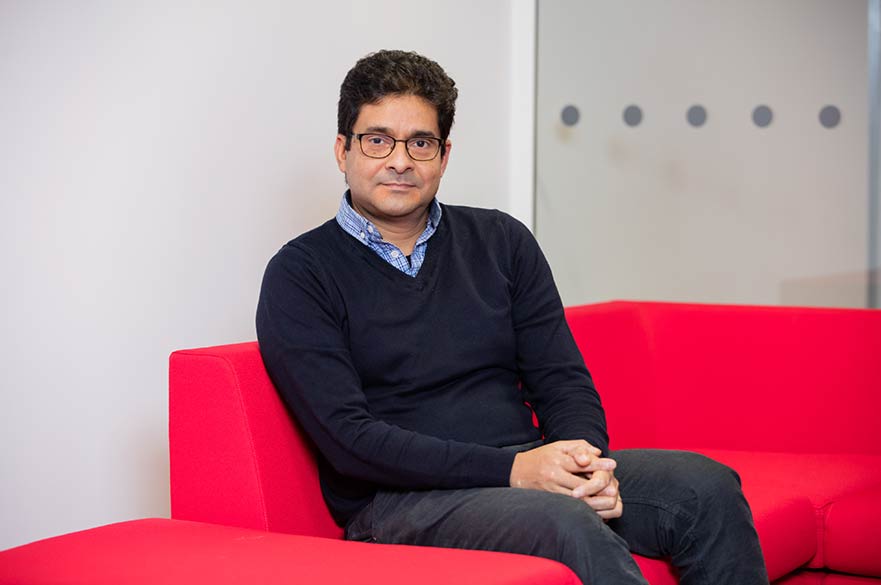 In this inaugural lecture, Professor Suvo Mitra will discuss a number of his studies on how vision, touch and ‘body sense’ support postural control, the information-processing involved in the control system itself, and the implications in particular of the interference that occurs between posture control and spatial and motor imagery tasks.

As humans, we derive much behavioural versatility from our bipedal stance and gait. However, the benefits of upright stance are accompanied by the continual sensorimotor and cognitive cost of maintaining an inherently unstable posture – we perform all our physical and mental tasks while concurrently perceiving and acting to prevent falling over. Once past infancy, we mostly manage this dual-tasking so successfully that we scarcely notice it. As we grow older, however, and our physical strength declines along with the speed and capacity of many of our psychological functions, this most fundamental and ubiquitous dual-tasking ability comes under pressure. The resulting loss of balance confidence can lead to activity limitation, and, in the extreme case, falling in old age can precipitate a chain of debilitative health problems.

In this inaugural lecture, Suvo will discuss a number of his studies on how vision, touch and ‘body sense’ support postural control, the information-processing involved in the control system itself, and the implications in particular of the interference that occurs between posture control and spatial and motor imagery tasks. An unsolved mystery in all this is why a highly automated, and largely sub-cortically and spinally controlled function like maintaining balance should interfere with higher level cognitive (cortical) functions. Suvo will finish the lecture with some recent work that uses electrophysiological techniques to examine the chronological details of interference between effortful cognitive tasks and the kind of continuous perception-action cycles that are required for balancing.

Suvo will conclude that studying the neuro-cognitive mechanisms that underpin posture-cognition dual-tasking can enrich our understanding of the upcoming challenges of living actively, well into old age. This work can help us design and implement the preventative interventions we will need to keep our growing older population active and healthy for longer.

Professor Suvo Mitra researches movement coordination and its interactions with psychological processes such as attention, memory, and imagery. He worked initially on the development of dynamical systems theory and techniques for understanding how rhythmic movements and body postures are assembled and sustained. More recently, his work has focused on the effects of cognitive load on the body’s balance and stability. Mental tasks and balance functions interfere more strongly in old age, with implications for falling or withdrawal from active living. Thus, ageing is a key area of interest in this work.

Suvo’s PhD work was funded by National Institutes of Health (NIH) and National Science Foundation (NSF) assistantships at Haskins Laboratories, Yale University, and the Centre for the Ecological Study of Perception and Action, the University of Connecticut. He then worked at the University of Warwick as lecturer and then associate professor. Here, he was involved in launching the Centre for Applied Cognitive Science funded by the ESRC Joint Infrastructure Fund, which supported his development of a virtual environments laboratory that applied early-stage virtual reality technologies to perception-action research. Also through the Centre, and eventually a spin-off commercial venture, he consulted with large organisations on interactive visualisation of information flow through operational networks.

Suvo’s research has been supported by grants from the Royal Society, Economic and Social Research Council (ESRC), Mercia Technology Seed Fund, Advantage West Midlands, and the Newton Fund (British Academy / Royal Society). He joined NTU in 2014 as Professor is the Department of Psychology, where he is developing the human movement, transcranial magnetic stimulation and electrophysiology laboratories, and building the Trent Ageing Panel of older research participants from the local community.

This event is free to attend but placed are limited so we recommend you book your place as soon as possible.

Please click on the Add to basket button above and complete the short online booking process to reserve your place.