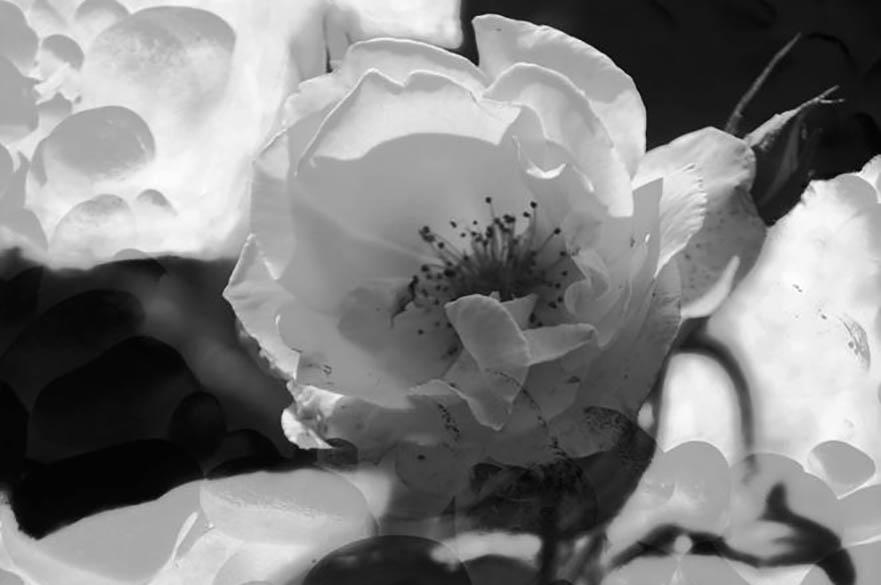 To launch their new White Rose Appeal, the National Holocaust Memorial Centre in Laxton, Nottinghamshire, commissioned a major new collection of work by Nottingham Trent University (NTU) academic and Nottingham based artist, Katja K. Hock. Titled Lichtung, the collection receives its premiere on the exterior of the New Art Exchange building, appearing through various windows as a series of prints and a moving image projection.

The moving image piece, which intends to become more visible as the sun goes down, blends together photographs taken of the rose garden at the Holocaust centre.

At the centre, nearly one thousand highly scented white roses grow, many of them dedicated by survivors and their families to create a dignified memorial for those that lost their lives in the Holocaust. The roses also play tribute to the ‘die Weiße Rose‘ a non-violent, intellectual resistance group in Nazi Germany led by students and a professor at the University of Munich. The group are thought to have adopted the white rose as symbol of purity and innocence in the face of evil.

Hock typically depicts natural forms and woodlands in her work. She is interested in natural occurrences such as wild-fire and the felling of trees through storms, and how these destructive processes go on the produce new life. Hock alludes to these natural environments through the title of this collection, Lichtung, meaning ‘clearing’ in German and also translating as ‘lighting’.

Hock's black and white work frequently deals with the subject of memory and the passage of time. It is her intension, that through the act of remembering histories such as the Holocaust - by going backwards and picking up the past - we change our ideas and perceptions to go forward in a new way.

Katja K. Hock is an internationally exhibiting artist working mainly with still and moving image. Through her practice she explores the relationship between what is visible in the image and that which might only be suggested. Born in 1971 in Nettetal Germany, Katja studied photography at the Fachhochschule Bielefeld before being awarded a DAAD scholarship in order to study for an MA at the University of Derby. She has subsequently, with the support of an AHRC scholarship, completed her PhD in Fine Art at Central Saint Martins and is currently teaching Fine Art at Nottingham Trent University.