History & Heritage & the Centre for the Study of Religion & Conflict Present 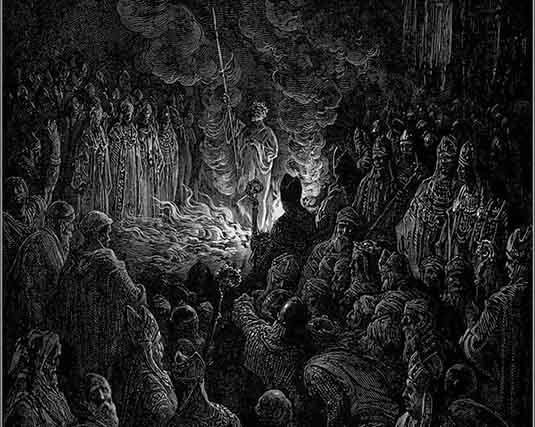 “Bearded Ghosts and Holy Visions: clerics in conflict on the crusades”

The image shows Peter Bartholomew Undergoing the Ordeal of Fire, by Gustave Doré.

Peter Bartholomew is best known for his ‘discovery’ of the Holy Lance inside the city of Antioch during the First Crusade, and for his subsequent death in an ordeal by fire which he undertook to prove its veracity.

Little is known about his background, but the First Crusade history of Raymond of Aguilers, one of his close circle, gives a unique insight into his world of visions and portents.  In the wake of the death of important legates such as Odo of Bayeux and Adhémar of Le Puy, a religious power vacuum, exacerbated by disputes among the leaders, generated internal conflicts among the clergy which resulted in the ad hoc election of a new patriarch at Jerusalem, Arnulf of Chocques.

This short paper will shed new light on the experiences of the clergy as a group to consider how far crusading offered opportunities to challenge the existing religious and social hierarchies with varying degrees of success.

Bring along your lunch and enjoy this special talk with Natasha. Everyone welcome.

Parking for external visitors is available on Clifton Campus. Please arrive via the main entrance where you will be directed by the gate staff.