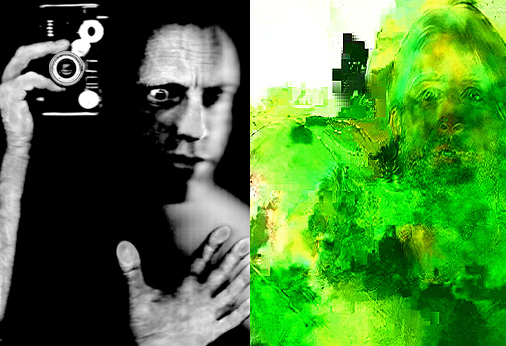 In this seminar from the School of Art & Design, Dr Vendela Grundell, postdoctoral researcher at the Department of Culture and Aesthetics at Stockholm University, will discuss the ways in which photographs facilitate unruliness by revealing and resisting the rules that situate them; focusing on two distinct visual tactics linked by their activist stance - glitch art and disability aesthetics.

This presentation revolves around the ways in which photographs facilitate unruliness by revealing and resisting the rules that situate them. Two distinct visual tactics linked by their activist stance – glitch art and disability aesthetics – are brought together to raise a concern with a photography that over-stresses visuality yet takes it for granted. With a focus on particular images, as well as the discourses around them, attention is called to how unruliness take form and make meaning in the interactions between photographers and photographic apparatuses: in material conditions, technical configurations, cultural conceptualisations, and social practices. The detailing of these interactions aims to point out the importance of being unruly in everyday life as much as in aesthetic exploration – and that the two are closely connected.

Processes of following and breaking rules are traced with a rare mix of perspectives drawn from art historical image analysis informed by semiotics and phenomenology, media theory about technological dependence and disruption, and disability studies on functional norm­a­tivity and variation. This approach captures how systems that define normality socially, technically, and physically are integrated with one other to position images and the bodies that they mediate.  In a binary discourse, they either align with society’s normative structures or else become the marginalised other who remains central by way of its exclusion from those structures. In response, images and bodies may be re-positioned as unruly: a position from where to critique definitions of normal­ity that limit what human and non-human corporealities can be and do.

Vendela Grundell is a postdoctoral researcher with a PhD in Art History at the Depart­ment of Culture and Aesthetics at Stockholm University (2016). She is a Visiting Fellow at the Depart­­­ment of Media, Communications and Cultural Studies at Goldsmiths, University of London, with her postdoctoral project “See­ing Differently / Seeing Difference: Emancipation and Aesthetics in Photo­graphy by the Visually Im­paired,” funded by the Anna Ahlström and Ellen Terserus Foundation at Stockholm University (2018-2019). Since 2012, she teaches art history with a focus on visual technologies and digital cultures in academic and professional institutions while presenting her work at international venues. Publications include “Navigating Dark­ness: A Photographic Response to Visual Impairment” in Liminalities: A Journal of Performance Studies 14:3 (2018), Flow and Friction: On the Tactical Potential of Interfacing with Glitch Art (Art & Theory Publishing, 2016. Review in Eye Magazine, April 2018), and a chapter in Art and Photography in Media Environ­­ments (Lusó­fona University 2016). Based in Stockholm, she works as a photo­grapher, artist and writer since 1998 – before which she trained as a dancer. Her creative commissions include some thirtyexhibitions in Sweden and abroad, twenty articles as well as visuals and text for diverse aesthetic contexts. For more information, visit su.se/profiles/vegr2497-1.190180 and vendelagrundell.com.

This seminar will be hosted by Dr Kevin Hunt, Senior Lecturer in Design, Culture and Context.

Attendance at this event is free. For any queries, please contact Dr Katherine Townsend

Image credit: Kurt Weston The Vision Machine (left) and Evan Meaney To Hold a Future Body So Close to One’s Own (right)