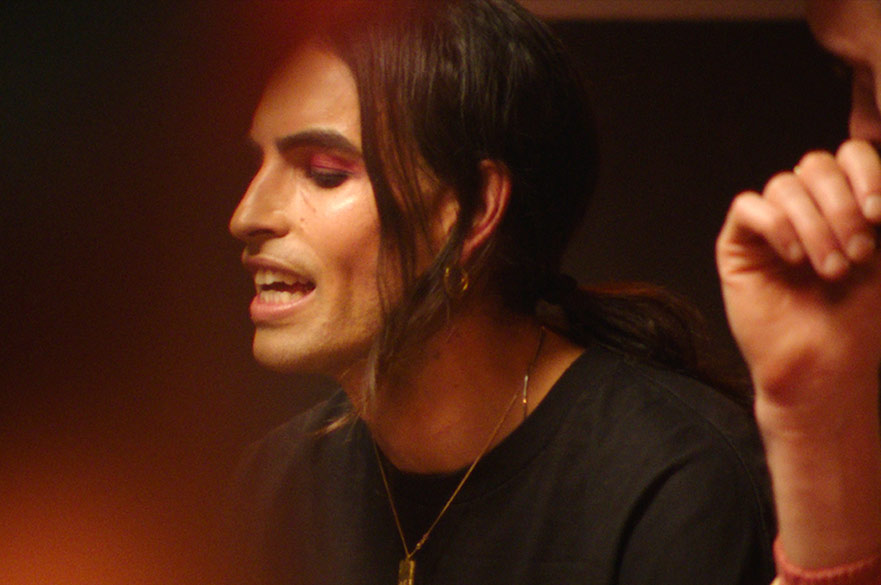 Each of the artists explore queer space through film, focusing on differing geographies, from the club to landscapes, documenting the erasure and reclaiming of queer spaces. The artists utilise numerous techniques such as voice overs and verbatim theatre to explore both personal and collective subjectivity. Collectively the films explore queer desire, (in)visibility, relationships, resistance, collective action, and the body’s relationship to space and technology.

If you would like to attend this event please RSVP to confirm your attendance.

Annette Kennerley
After the Break
1998
13 minutes

Annette Kennerley is a writer and filmmaker based in London. She was born in Cheshire and started making films in the 1980s. She was awarded a BA in Fine Art (Film & Video) at Central Saint Martins College of Art & Design, London in 1991 and has worked mainly with Super 8 and 16mm film, experimenting with optical printing techniques and with the support of production awards from the Arts Council. Her work has exhibited at cinemas and film festivals nationally and internationally.
Annette’s films explore themes of childhood, motherhood, love, loss and sexuality. She draws on personal experiences in many of her films, though she has also made experimental documentaries with transgender people and directed a Transgender Film Festival at the LuxCinema for several years in the 1990s. She is also a writer and a teacher/mentor to young people.

Stephen Isaac-Wilson is a black queer London-based director who has directed ﬁlms for Channel 4, i-D, Victoria Miro and the Tate, and worked with artists including Jorja Smith, Isaac Julien and Klein. Stephen grew up in southeast London, and in 2013 was accepted onto the BBC’s prestigious production trainee scheme, where he began his ﬁlmmaking career. In 2015/16, he worked across the Emmy award-nominated series about LGBT rights, Gaycation, presented by Ellen Page.
Last year he was commissioned to direct a portrait ﬁlm for the Tate’s Queer British Art exhibit and also produced a 40-minute Mykki Blanco documentary about black queer alternative culture in Johannesburg. Stephen combines both his journalistic background with his visual art sensibilities, to tell beautifully emotive and thought-provoking stories.
His work has been screened at the ICA, Tate and the Barbican, as well as a ﬁlm festivals including Outfest and Iris Prize.

Thank you for registering your place at our tenth Bonington Film Night. If you have any questions in the meantime, please get in touch with us at boningtongallery@ntu.ac.uk.