Following on from the NPF 2018 puppetry talk series, the 2021 Festival series will celebrate puppetry with talks and debates around reaching new audiences and widening participation. Our speakers are up-and-coming local, as well as established, creators and makers. Inspired by puppetry, their narratives centre on contemporary issues such as Disability, Mental Health, Addiction, and Gender Identity. They will talk about facilitating participation, autobiographical stories, and their creative processes.

Presentations and debate by local practitioners and established designer-maker on contemporary narratives, including disability, mental health, and gender identity.

What Happened to You: The puppet making process.

Nikki Charlesworth is a Theatre Designer, Puppeteer/Puppet Maker and recently turned Animator, from Nottingham. In her professional life Nikki has worked at the forefront of disability-led theatre-making, contributing to new, ground-breaking work in the sector, and advocating for accessible puppetry training opportunities. Nikki has worked for pioneering disability-led companies such as Graeae Theatre Company, and Circus company Extraordinary Bodies and was recently announced as one of the winners of the Evening Standard Future Theatre Fund, in association with TikTok. Nikki will be presenting her show: “What Happened to You?” at Nottingham Puppet Festival, and will be sharing more about the making process for this show as part of this talk.

Daniel is an award-winning actor, puppeteer, magician, writer, and self-proclaimed mess of a man. After graduating from De Montfort University in 2020, Daniel founded The Dog Rose, a Leicester-based collective creating multi-disciplinary work that tackles taboos. Daniel's main focus is mental health; fueled by his own struggles with addiction and identity he uses puppetry as a creative outlet. His work arguably should never see the light of day, which is why he thinks it's so important.

Transforming the Body - using the body's physicality to create expressive movement and spectacle. Different materials, their practicability and effect.

Tony lives and works in London. He studied painting, and then became immersed in carnival, which in turn led to a fascination with puppets and movement. He specialises in making usually large-scale, worn, driven, or manipulated creatures and sculptures for outdoor/indoor theatre and filmed production. He has worked on projects with companies including Graeae, Mahogany Arts, Kinetika, Emergency Exit Arts and Elimu Mas Band, as well as making for TV, theatre and film.

There is a continuous balance between respect and awe at the natural world and the desire to express and create our own dreams. 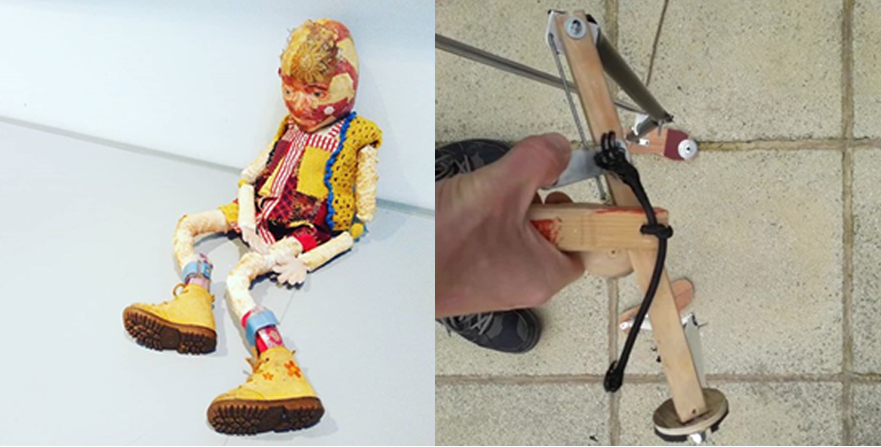 ‘What Happened to You’ (WHTY) Nikki Charlesworth

“I am so excited that Nottingham Puppetry Festival is returning. The 2018 Festival touched the hearts of many, reaching new audiences and widening participation. This year, we will be celebrating with talks about Puppetry and Wellbeing from up-and-coming local, as well as established practitioners. Inspired by puppetry, their narratives centre on contemporary issues such as Disability, Mental Health, and Gender Identity.”

Register here to get the link