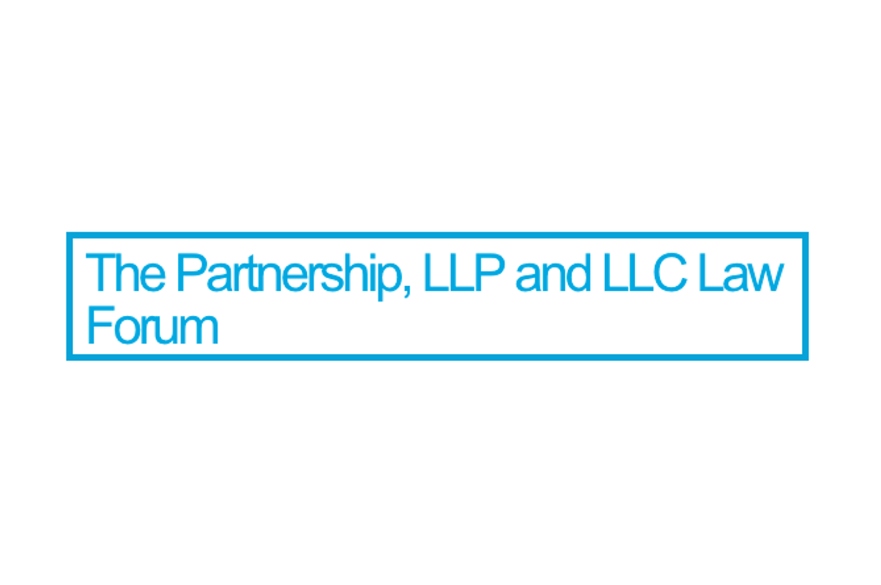 We are pleased to announce the 4th Annual Conference of the Partnership, LLP and LLC Law Forum, which will be held on Thursday 9 September 2021.

We are pleased to announce the 4th Annual Conference of the Partnership, LLP and LLC Law Forum, which will be held on Thursday 9 September 2021.

**Any updates to the programme will be posted on the Partnership Law Forum website where you can also sign up for updates.

Professor Geoffrey Morse: What is the point of section 26 of the Partnership Act 1890?

One of the stranger anomalies in the Partnership Act is that the ability to end or leave a partnership unilaterally by notice is the subject of not one but two sections, ss 26 and 32(c). Further, those sections are located in different parts of the Act and are far from being identical. In the case of English law this anomaly is generally regarded as having been, in practical terms, pragmatically neutered by the courts, however in a way (or ways) which cannot be said to be entirely convincing. But courts in other jurisdictions, notably Scotland and New South Wales, have queried this solution and attempted their own, often equally debatable, attempts to square the circle.
But how did we come to have two sections on the same subject matter? or are they in fact applicable to different scenarios? Does their gestation also throw any light on the differences between them? Then, finally, given that the two sections do exist, do we actually need both of them? If not, what is the point of section 26?

Luke Burgin and Dr Caroline Gibby: Old Dogs and New tricks – the evolving role of the General Partnership in the professional services sector

Frederick Pollock, stated that the governing principles behind the contract of partnership law should be ‘founded on personal confidence between the partners’. Whilst the general partnership has traditionally been the business vessel in which this mutual respect has manifested itself within the professional services sector, there is growing criticism that the general or traditional partnership is now out of touch with modern-day professional practice needs when compared to alternatives, such as Limited Partnerships, Limited Liability Partnerships and Limited Companies. Yet, still it is clear that for solicitors, in particular, the general partnership is the business model of choice.
This paper provides a constructive and critical account of general partnerships, assessing the concepts of partnership law which underpin general partnerships and its continued application within the legal services sector. Contemporary examples will also be assessed when navigating through the various attributes of such business structures with particular consideration being given to disclosure and registration obligations, unlimited liability, tax, succession planning, insolvency procedures, partner disputes and organisational structure. From this, this paper will examine the functionality of general partnerships as it is this which is claimed reduces their appeal rather than the strictures of the Partnership Act 1890. Finally, this paper will contend that despite calls the clarion call of the Limited Liability partnership, there is much to value in the general partnership and so it remains viable as an advantageous business medium given the culture it promotes and its notable adaptability during Covid-19.

We will look at the different treatments (tax, accounting/reporting, personal liability and protections) of partners, LLP members and directors/shareholders to see how they’re different and how they are sometimes perhaps more similar than one might expect, with particular reference to how the tax system draws the line between employed and self-employed people and also looking at the way some recent tax cases and other developments may be eroding some of those differences.

Understanding the true meaning of a traditional partnership share and its implications has always been a problem because so much depends on the context: is it the internal or external perspective that is in question? Or is there actually any difference between those perspectives? And what rights does a share confer on a partner? Mistakes are too often made in drafting partnership agreements when referring to partners’ interests in its assets.
How do the rights of partner differ from those conferred on a member of an LLP? What are the implications of that difference, e.g. in terms of the enforceability of restrictive covenants? What, in any event, does a share in an LLP consist of? Does it matter that there is no statutory definition?

Jeremy Callman: Forfeiture in LLPs and Partnerships: an aberration or a new frontier?

Forfeiture is a punitive equitable remedy, historically applied principally in the context of agency to deter disloyal behaviour by fiduciaries. In the decision of Hosking v Marathon Asset Management LLP [2017] Ch 157, the Court applied it to forfeiting the profit share of a departing member of an LLP who was in fiduciary breach.
Is this judgment a narrow decision flowing from a somewhat unusual LLP agreement, or is this an important new frontier in disputes between outgoing members/partners and their former firm? Should the law be applied in the way it was and what limits ought there to be to the principle? How can and should forfeiture be deployed in practice?

Oliver Bullough: Why the UK failed to regulate Limited Partnerships

After a major Moldovan financial scandal in 2014 was revealed to have been facilitated by the use of Scottish Limited Partnerships, members of the UK parliament fought hard to introduce tighter regulations on this obscure kind of corporate structure. The effort not only failed but, thanks to lobbying from the Treasury, which was concerned that extra regulation would anger the Private Fund industry, and cause it to relocate to Luxembourg, actually ended with Limited Partnerships even less tightly-regulated than before.

Elspeth has taught and researched partnership law for 25 years and is the founder of the Partnership, LLP and LLC Law Forum. Her most recent publications include ‘Partnership law: used, misused or abused?’ (2021) 32(2) EBLR 207-249 (described as a "landmark paper" on the criminal activities of UK partnerships overseas by an investigative journalist writing for the organisation OpenDemocracy; ‘Limited partnership law and private equity: an instance of legislative capture?’ (2019) JCLS, Partnership and LLP Law (2nd edn, Wildy, Simmonds and Hill 2018), 'A Weak Vessel? Why the Insolvency Regime for Partnerships and LLPs is Failing to Protect the Salvage or Diminish the Number of Wrecks' (2018) 6 NibleJ 05, 'Square pegs and round holes: why company insolvency law is a bad fit for partnerships and LLPs' (2018) 31(3) Insolvency Intelligence 88.

Elspeth’s current teaching includes Business Organisations, an LLM module which compares general partnerships, limited partnerships, LLPs and private limited companies. She is a qualified (non-practising) solicitor and contributes the legal updates to the journal of the Association of Partnership Practitioners, ‘A Propos Partnership’

Geoffrey Morse is currently the Professor of Corporate and Tax law at the University of Birmingham. He has taught at universities since 1968 and was previously, between 1988 and 2004, Professor of Company Law at the University of Nottingham. In the partnership field he has published 9 editions of his book with OUP, originally on partnership and now including LLPs (latterly with Thomas Braithwaite), been the co-ordinating editor of two editions of Palmer’s LLP Law, and was the consulting editor of the section on partnership in Halsbury’s Laws of England. He has also published widely in the fields of company law and tax law.

Luke Burgin is a graduate of the University of Sunderland law school, having completed his LLB and LLM /LPC there. Initially Luke was not sure that he wanted to qualify as a solicitor but following work with experienced practitioners in the law school and working part time, he decided to take the plunge, looking to work within the corporate sector. He is now undertaking his training contract at St James Square Solicitors, Newcastle, but also harbours an aspiration to continue his studies, looking to embark on a PhD following completion of his training contract.

Dr. Lida Pitsillidou is currently a Lecturer in Company Law and Corporate Governance at UCLan Cyprus. Her research and teaching interests lie primarily in the areas of Company Law and Corporate Governance, particularly on the issues of minority shareholder protection and directors’ duties. She is currently acting as the LLB Deputy Course Leader and Research Degree Tutor. Prior to joining UCLan’s Law School, she worked as a Teaching Fellow in Commercial Law at Newcastle University (2014-16) and a part-time Teaching Assistant at the same institution (2011-2014). She holds an LLB (Hons) from the University of Sunderland, an LLM in International Business and Commercial Law from the University of Manchester and a PhD from Newcastle University. Her current research focuses on the recent developments of the law of multiple derivative actions in the UK where she explores various justifications behind allowing such actions. Dr. Pitsillidou has presented her research at a variety of leading legal academic conferences and research seminars, such as the annual conferences organised by the Society of Legal Scholars (SLS) and the Socio-Legal Studies Association (SLSA). You can view her full academic profile here.

Mark is a partner in the tax and reward group at Macfarlanes LLP, where his practice focuses on the taxation of alternative investment funds and fund managers and includes advising other professional firms.  He is currently Chair of the Taxation Committee of the British Venture Capital and Private Equity Association.  Along with another Macfarlanes partner he is the author of a new book “Taxation of Partnerships and LLPs” to be published by Sweet & Maxwell this Autumn.

Roderick I’Anson Banks was called to the Bar in 1974 and has specialised in all forms of partnership law since the late 1970s. In 1991 he set up what is still the only set of chambers specialising exclusively in traditional partnership and LLP law. He has been the editor of the standard text Lindley on Partnership (now retitled Lindley & Banks on Partnership) since 1979 (21st edition in preparation). He also wrote and subsequently edited the two volume loose leaf Encyclopedia of Professional Partnerships for over 25 years. He acted as a consultant to the Law Commission in its review of partnership and limited partnership law between 1999 and 2003. He is a CEDR trained mediator and lectures extensively on partnership and LLP related subjects.

Jeremy Callman is a barrister specialising in Partnerships and LLPs. His practice focusses on LLP/partnership disputes, as well as advising firms and individuals. He regularly appears in courts, arbitrations and participates in mediations, as well as advising management teams in firms on partnership issues. Legal 500 2021 top rank him and say: “He is simply brilliant. His knowledge of LLP and Partnership law is unsurpassed”. He is ranked as a “Star Individual” by Chambers UK Bar 2021 in Partnership. Jeremy also regularly lectures and writes on LLP and Partnership issues.

Oliver Bullough is a journalist and author from Wales, who specialises in writing about financial crime and the former Soviet Union. His most recent book was the Sunday Times bestseller Moneyland. His journalism appears in the Guardian, GQ and elsewhere.

If you are interested in attending please reserve your place using our online booking form. If you have any questions, please contact Elspeth Berry.