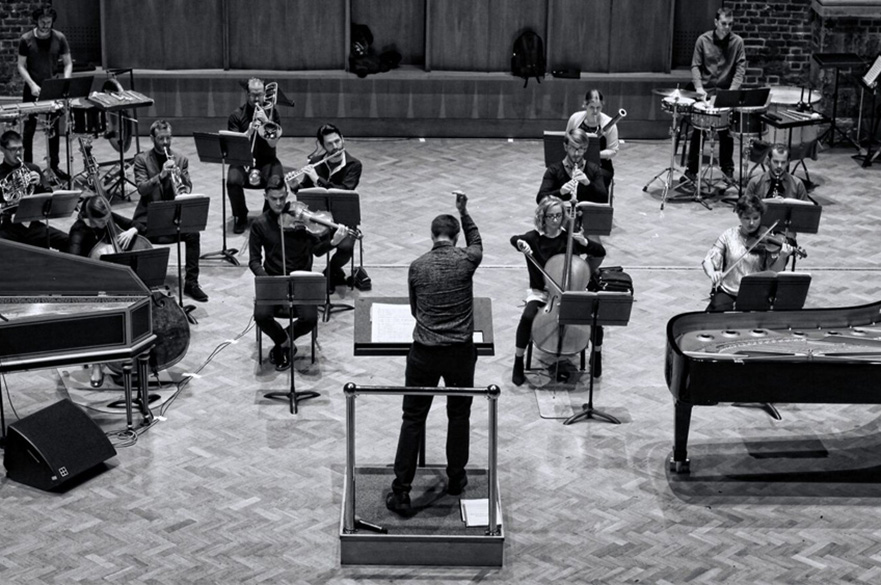 We're thrilled to welcome back award-winning new-music collective Riot Ensemble to University Hall – this time performing an hour-long programme of chamber music which includes or emulates the voice. Ranging from the wild, rambunctious sounds of Mirela Ivičević and Ashkan Behzadi to reflective and mysterious music from masters such as Lutyens and the quickly emerging Michaela Catranis. The concert is anchored by Betsy Jolas’ too-rarely heard Quatuor II for Soprano and String Trio.

Fear.Less.Songs
This programme involves an ever shifting mixture of chamber music which includes or emulates the voice. Ranging from the wild, rambunctious music of Mirela Ivičević and Ashkan Behzadi to reflective and mysterious music from masters such as Lutyens and the quickly emerging Michaela Catranis.

Riot Ensemble
Riot Ensemble connects people to great contemporary music in concerts and events that are just as innovative, vibrant and rewarding as the music itself. The members of Riot are some of the top European soloists in new music, and with Riot they work as performers, curators, commissioners, and collaborators, creating and producing a diverse array of projects.

Based in London, Riot is active in bringing emerging international voices to the British new-music scene and since 2012 has given over 200 World and UK premieres by composers from more than thirty countries. They enjoy close working relationships with some of the most important composers of our time, including Clara Iannotta, Chaya Czernowin, Ann Cleare, and Georg Friedrich Haas.

In 2020 the ensemble was awarded the prestigious Ernst von Siemens Ensemble Prize.

Riot performs regularly at Wigmore Hall and Huddersfield Contemporary Music Festival (UK) as well as Dark Music Days (Iceland), Tampere Biennale (Finland), Nordic Music Days (Sweden), and November Music (Netherlands). In 2020, the ensemble began a new partnership with King’s Place where they present their ReNEW series, focusing on bringing the most cutting edge international new music to London. They have also recently been appointed Ensemble-in-Residence at the Royal Academy of Music.

University Hall is part of Curated & Created — NTU's extra-curricular arts programme. Get the latest announcements and offers straight to your inbox by signing up to our mailing list.