Despite storming into an early lead in front of a sell-out arena, NTU's Ice Hockey team just lost out to the determined and resilient University of Nottingham (UoN) 4-3, in an amazing Varsity Series opener yesterday! 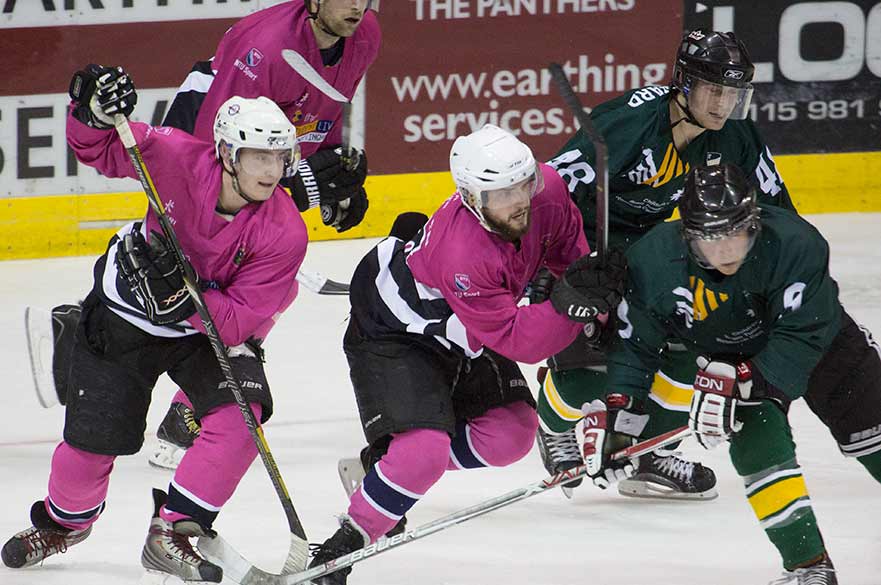 The first 2014 Varsity Series face off - What an intense match!

Despite storming into an early lead in front of a sell-out arena, NTU's Ice Hockey team just lost out to the determined and resilient University of Nottingham (UoN) 4-3, in an amazing Varsity Series opener yesterday!

After a traditional pre-match scuffle by the team mascots, and a well respected chorus of the national anthem, the 2014 Varsity series kicked off. The opening exchanges all went in NTU's favour with some decisive breaks through the UoN lines, and UoN conceding a first penalty in the early stages for tripping. NTU took full advantage of their extra man, with Ryan Rathbone sending a pile-driver through a crowd of bodies and into the net.

UoN's ill-discipline cost them again moments later. After a conceding a second penalty, they were un-done by a sharp NTU attack that eventually found itself cutting square across goal for Rathbone to tap in his second from all of two yards.

The Trent Army, at this point in delirium, broke into chants of 'Easy, Easy, Easy' and with the adrenaline pumping, veteran Gareth O'Flaherty tucked in a third goal. NTU kept up the pressure with Rose sending several goal-bound efforts UoN's way.

As play went on, UoN saw glimpses of a comeback, but had two goals chalked off in quick succession after frantic scrambles in NTU's goal mouth, and with NTU's keeper Kelly looking unbeatable between the sticks. It seemed as though it was shaping up to be a long night for UoN, but in the final minute of the first period they hit back on the counter, sending a cool finish through Kelly's legs to get their first score.

NTU appeared to regain momentary control as the second period started, looking composed in defence, they slowly built up a number of chances including a thunderous long range shot from Hovell that had UoN's keeper truly tested. However, successive NTU penalties gave UoN a two man advantage. While NTU stood firm at the back, the momentum shifted in UoN's favour.

A dazzling long range goal from UoN's number 22 even had a few NTU fans applauding in admiration. The boys (and girl) in pink continued to throw their bodies on the line, but their defence was breached after a slip-up at the back allowing UoN to tap-in to an empty net which levelled the scores to 3-3 and finally brought some noise from the opposite side of the arena.

With NTU's play getting ever sloppier, and a series of third period penalties, UoN number 22 seized his opportunity and pushed his team into the lead driving a low shot through a crowded goal mouth to notch his second of the night.

A five minute match penalty moments later, effectively ended the game for NTU, though not before a frantic battle led by the experienced O'Flaherty where NTU valiantly threw everything at their opponents. Despite a determined drive they were unable to break through a now composed UoN defence, who held out until the end.

The manner in which NTU let the game slip was probably the most disappointing thing for all those connected with NTU but ultimately UoN deserved their 4-3 win.

NTU refuse to be disheartened with 14 other fixtures to take part in, this year's Varsity Series trophy can easily be ours!

Visit our flickr page to re-live the action and see the great collection of images from the 2014 Varsity Ice Hockey match. For more information about upcoming matches visit our 'this series' page.