Over 4000 people attended Monday's Varsity Basketball, making it the biggest Varsity event in the UK. And, despite NTU having a strong first half, they ended up fading away in the second, as a strong UoN team won 75 – 43 taking the series lead again! 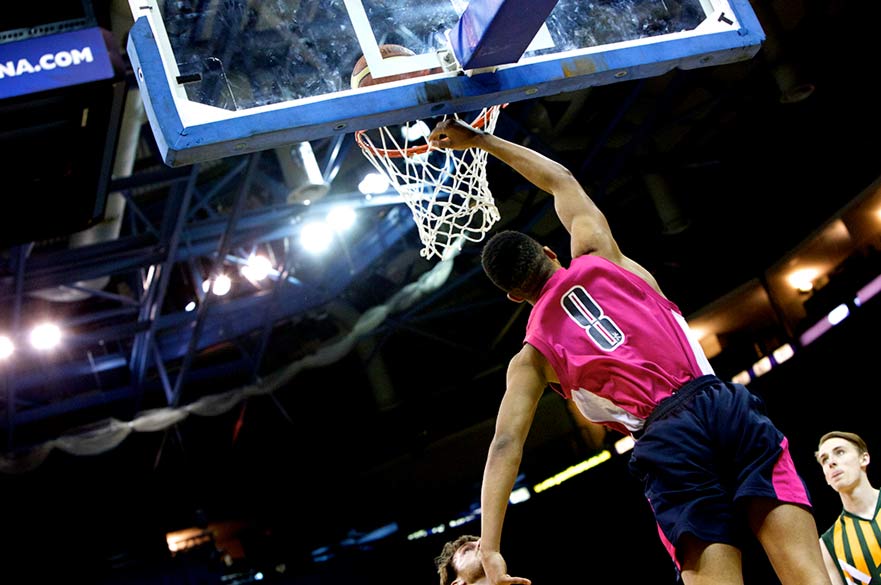 An intense basketball game led to NTU closely missing out on a win!

Over 4,000 people attended Monday night's Varsity Basketball game, making it one of the biggest Varsity events in the UK. Despite NTU having a strong first half, they ended up fading away in the second half of the game as a strong UoN team re-took the lead in Varsity.

NTU won the tip-off but failed to take advantage as UoN stormed into an early 5-0 lead. A slam-dunk from UoN Smith was pick of the baskets. NTU clawed their way back quickly in this high tempo game, Ben Hallam, Ben Egan, and captain Joe Meeks fired in the twos before Imran Akhtar hit a big three pointer to give NTU a 7-9 lead.

Both sides then continued to trade points for the rest of the first quarter. But efforts from Akhtar and Vaughan were cancelled out by a late flurry of UoN baskets, almost entirely from free-throws. A drop in NTU discipline gifted a 19-14 first quarter lead to the UoN.

As the second quarter started some shifty behind-the-back passing from UoN’s Ezefor had NTU deceived, allowing UoN to score a quick-fire seven points and increase their lead. A resilient NTU team kept their heads up and found another gear. Grewal, Kala-Lee, Hallam, Williams and Akhtar all found their shooting boots to tighten up the score. In addition, NTU’s defence stepped up a notch too, preventing a host of UoN opportunities, though not enough to prevent a half-deficit. Half-time score: UoN 36-31 NTU.

It seemed as though half-time may have come at a bad time for NTU. Michael McKen took just 31 seconds of the restart to add two more to NTU's tally, but sadly the boys in pink just couldn't kick on. UoN racked up the points with little reply from NTU. The game was tense, but with NTU faltering in front of the basket, the score started slipping away. UoN continued to grow in confidence as near enough every shot made it in, UoN's Brown in particular on fire, accounting for 13 of his team's 23 third quarter points. Hallam and Egan made some rare editions to the NTU score but the third quarter score finished 59-36, leaving a long way back for NTU.

The fourth quarter went the same way. Hallam added five to his personal tally and Grewal finished of the NTU scoring. With players tiring from the frantic action of the earlier periods, space on the court seemed to open up at will and with all the confidence flowing from the UoN team, they capitalised clinically to push their own score up to 75, and take what in the end appeared to be a comfortable win.

Overall the night had proved a thoroughly entertaining Varsity event. Kicked off by a quality and hearty exhibition of Wheelchair Basketball, featuring guest appearances by the SU executives, and with a half-time lesson in Cheerleading handed out in some style by the Trent Tiger. But, unfortunately, it was UoN who provided the Basketball lesson this time, as they consistently churned out points throughout all four quarters. The performances of everyone involved from both sides were top notch, but at the end of the day it was UoN who took home the trophy and took home a 3-2 lead in the 2014 Varsity series.

However, NTU are determined to bring home the trophy this year and no doubt the teams will perform to their best in upcoming fixtures in order to make this happen!

(Thank you to our volunteer match report - Adam Hemingway, for providing the original match content)