Scientists are embarking on a conservation project to safeguard the lineage of endangered takhi in Mongolia – considered to be the world's last truly wild horse. 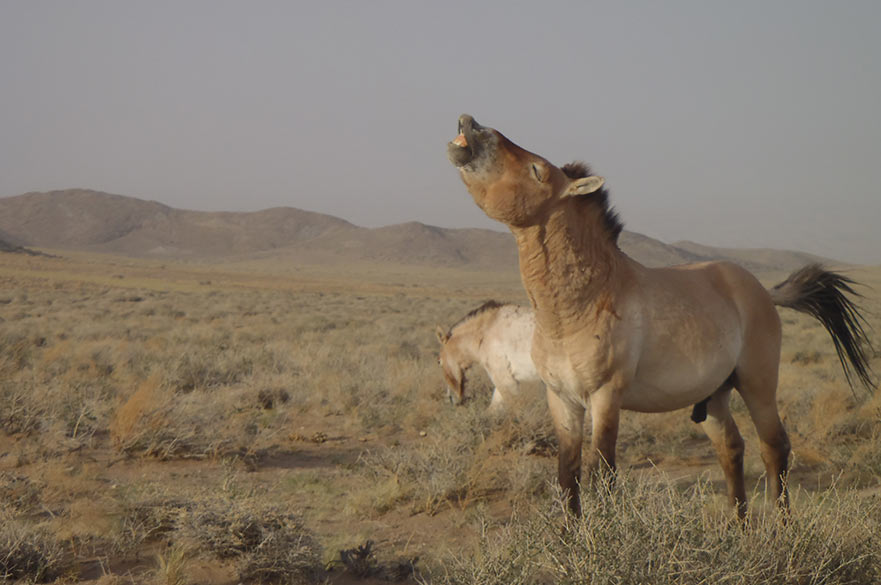 Takhi are considered to be the world's last truly wild horse

The much larger number of domestic horses means that inter-breeding would very possibly result in the dilution of takhi genetics.

Scientists are embarking on a conservation project to safeguard the lineage of endangered takhi in Mongolia – considered to be the world's last truly wild horse.

The study, a collaboration between researchers at Nottingham Trent University and the Association pour le cheval de Przewalski: Takh, aims to better identify the risk of the rare horses – once extinct in the wild – merging and cross-breeding with domestic horses when they are finally released from their 14,000 hectare fenced site.

The work will involve investigating personality and behavioural differences within the 40-strong herd in the Zavkhan province, Western Mongolia, to see how they influence family group, herd formation and maintenance.

It is hoped that a better understanding of the factors which promote or reduce social unity among the herd could provide a crucial insight into which family groups and individuals are more or less likely to come into contact with domestic horses.

Hannah Davie, a researcher in the University's School of Animal, Rural and Environmental Sciences, will spend 18 months with the horses, collecting data on their interactions and behaviour across each of the seasons.

The takhi, also known as Przewalski horses, are the ancestor of today's domestic horses. However, as a species, they were never domesticated and are therefore considered the world's last truly wild horse.

They became a target for hunting and capturing campaigns, which partly led to their extinction in the wild in the late 1960s.

The success of three reintroduction programmes in Mongolia has since seen them upgraded from 'extinct in the wild' to 'endangered'.

There are just 390 of the horses currently free ranging – and the entire sub-species, of about 2,000, is descended from just 12 horses captured in the wild between the late 1880s and early 1900s.

In contrast, there about two million free-ranging domestic horses living in Mongolia.

Hannah Davie said: "As takhi populations begin to expand beyond the protected areas, frequent interactions between them and domestic horses is certain. The much larger number of domestic horses means that inter-breeding would very possibly result in the dilution of takhi genetics, to the point what they would no longer be a distinct species.

"True takhi would be extinct in the wild once again."

As takhi were only reintroduced to the wild 20 years ago, knowledge of their behaviour and ecology as a free-living wild horse is limited.

Hannah said: "If one horse kicks another or grooms another, do others move further away or come nearer – are bold individuals more or less likely to perform behaviours that promote unity within a group? These are the types of things we'll need to examine. With endangered species, each individual counts."

Claudia Feh, the Director of the Association pour le cheval de Przewalski: Takh, said: "The goal is to understand the individual contribution to what makes several family groups stay together in one herd.

"Staying together in one herd will allow young horses to disperse to their reproductive group without leaving the herd and therefore avoid contact with roaming domestic horses."

It is hoped that the information gained from the study could also be useful in managing free-ranging feral horse populations and even groups of domestic horses.