Women's Basketball results: Lead was a short-lived one

On Monday 24 February, at the Capital FM Arena, NTU went from leading in the Varsity series to losing the battle of Basketball against UoN. The final result of UoN 61 - 20 NTU led to the epic series scores being tied again. 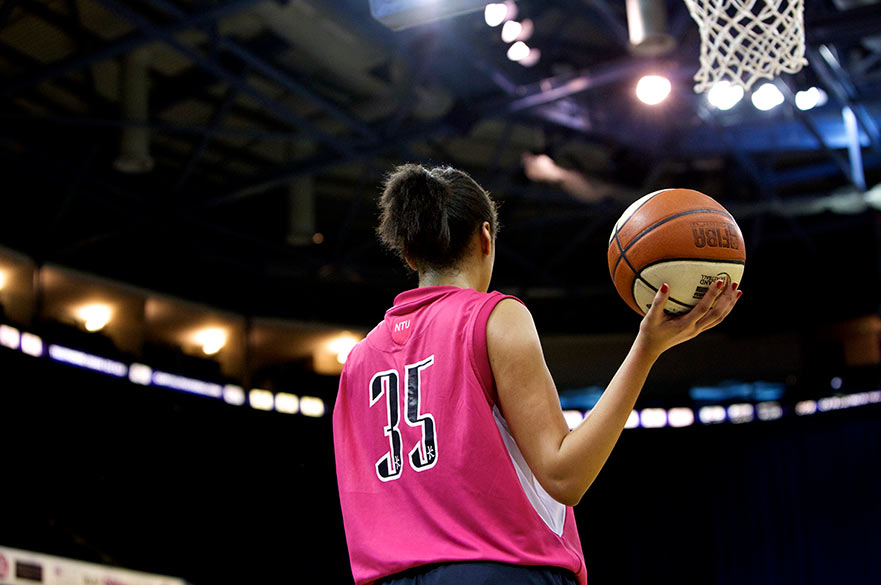 The 61-20 defeat to UoN leaves the Varsity series tied again!

Following defeat in the previous round, UoN equalised the Varsity series in convincing style with a resounding victory over NTU's Women's Basketball team.

After UoN won the tip-off, it was NTU who had the first chances with Fern Jackson going close after a matter of seconds. UoN made the most of their opportunities with their point and shooting guards, each netting a brace either side of a lone basket by NTU's Pippa Burrell. NTU piled on the pressure as the first quarter continued, but couldn't find a clear-cut chance and were hit on the break several times with the first quarter score ending UoN 16-2 NTU.

UoN started the second quarter where they left off in the first, scoring a free-throw and a two-pointer in quick succession to extend their lead. Some quality showboat dribbling by NTU's Jackson got the crowd going but couldn't find an end product. An injury to Jackson moments later forced her out the game and broke up NTU's rhythm, UoN took advantage of this immediately, as their centre hit seven points back-to-back.

Despite Burrell netting two sets of free-throws and a basket from Vivian Hui, UoN dashed any hopes of an NTU comeback with six more two-pointers of their own before half-time. The score at half-time stood UoN 38-8 NTU.

Trent Dance bought their A-game for the half-time show and as the third quarter got under way it seemed Burrell had been taking notes as she jinked her to baseline. But a lack of creativity before the basket hampered NTU all night and two points from Hui was all they had to show from the start of the third quarter.

Unfortunately UoN had no such problems, with their shooting guard and replacement point guard on fire, netting 14 between them in the quarter. The determination levels never dropped from NTU and Burrell sent home two free-throws to take the third quarter score to UoN 52-14 NTU.

As the players tired, the fourth quarter proved a lower scoring affair. To their credit the NTU ladies kept fighting to the end and had their best spell during the final phases. Burrell kept up her record of netting in every quarter as she added four more. Nicola Kale also found the target but it was too little too late for NTU and after nine further points, UoN well and truly had this one in the basket.

It finished UoN 61-20 NTU. The NTU performance was commendable, the ladies never gave up, but a lack of confidence and accuracy in the offense cost them, as a quality UoN side took their chances time after time to thoroughly deserve their victory and equalise the series at 2-2.

For more information about upcoming Varsity fixtures please visit our pages or the official Notts Varsity page. And, to view some great images from the game, simply check out our Flickr set today.

(Thank you to our volunteer Adam Hemingway for sourcing original match content.)

Women's Basketball results: Lead was a short-lived one