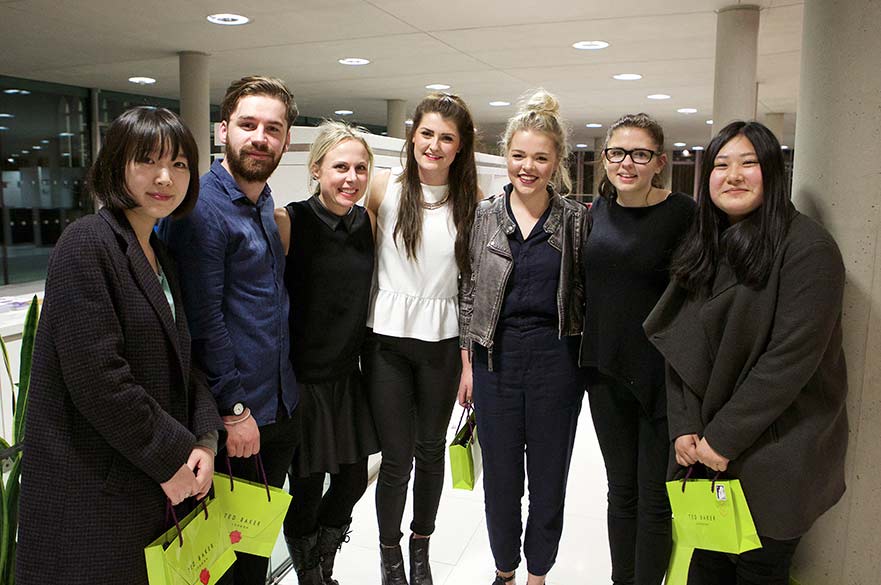 The winning team with Head of Menswear at Ted Baker, Rebecca Rodden

As a step forward from their first year studies, which teaches research, pattern cutting and garment construction, second year students were challenged to apply their knowledge to a commercial, industry focused project incorporating professional practice.

This year Ted Baker gave the students a chance to focus on a completely different level of market. The brand, founded by Dr Raymond Kelvin, CBE, was first started in Glasgow 25 years ago. It now has 330 locations worldwide, including 210 concessions with 15 different department store partners in six countries in the UK, Europe, USA and Asia. It was felt that this quintessentially British brand, with its quirky yet commercial offering, was the perfect collaboration for the NTU Fashion Design students.

Working closely with Senior Lecturer Sue Walton, the Ted Baker design team presented a brief which involved taking the brand on a metaphorical journey with the Orient Express, drawing on inspiration from its original journey which ran from Paris to Istanbul. This glamorous idea created the perfect backdrop for the design students to create luxurious collections that could span from day through to night.

During their original briefing in October, Head of Menswear at Ted Baker, Rebecca Rodden, advised students, "Don't be scared to innovate, but innovate in the right way." She also encouraged them to get accustomed to the Ted Baker ethos and target consumer by visiting different stores. "There is a story within each garment," Rebecca added, "It is as much about what you see and neglect, as well as what you see and are inspired by."

Students were asked to design a collection of siz/seven outfits in teams of six or seven people, to create an A/W 2014 collection. Each student had to make three garments – one jersey, one trouser, and one outerwear piece (coat /shirt). As part of their learning outcomes they were also expected to create a look book, presentation and portfolio, including market research, illustration of line-up, and promotion.

Half way through the project, the students presented their development work to Ted Baker and were commended for their "fantastic presentation skills, we couldn't believe they were second years." Sue Walton added, "Ted Baker gave very constructive feedback and the students have really risen to the challenge".

The final menswear collections were presented on 14 March as part of an extremely well executed fashion show organised by the students themselves, complete with a conductor who stamped visitors' tickets on the way in, vintage props, and a DJ perched above the catwalk. The Ted Baker Head Office were in attendance, and after viewing all of the collections, selected a winning team who received a Ted Baker goody bag and a work placement as part of the Ted Baker Design Team. The winning team included, Leisa Hughes, Stephen Neul, Lili Liu, Eleanor Northway, Anna Edgerton and Yvonne Shu.

Leisa said, "Our inspiration was mainly travelling, so looking at trains, the cities included in the Orient Express travels. We were looking at travelling light, so we had aspects that could be changed. My own outfit included a fold away Mac, which changed into a bag, and running through our whole collection was a Pleat idea that could be filed and changed, which Ted Baker loved."

Stephen said, "It's a bit of a shock [to win] but it feels good at the end of how much work we put in… I'm lost for words."

Feedback from Ted Baker was extremely positive, the team mentioning that they were particularly impressed with the professional staging of the show and the strong impact the collections made on the catwalk. The team said they were inspired by the quality of work coming through Nottingham Trent University and were so impressed they even wrote a blog about it, adding that it is very encouraging for the future of the fashion industry.

Find out more about the fashion design course.