Executives from Ted Baker were wowed at a catwalk show arranged by and featuring clothing designed and created by students from Nottingham Trent University. 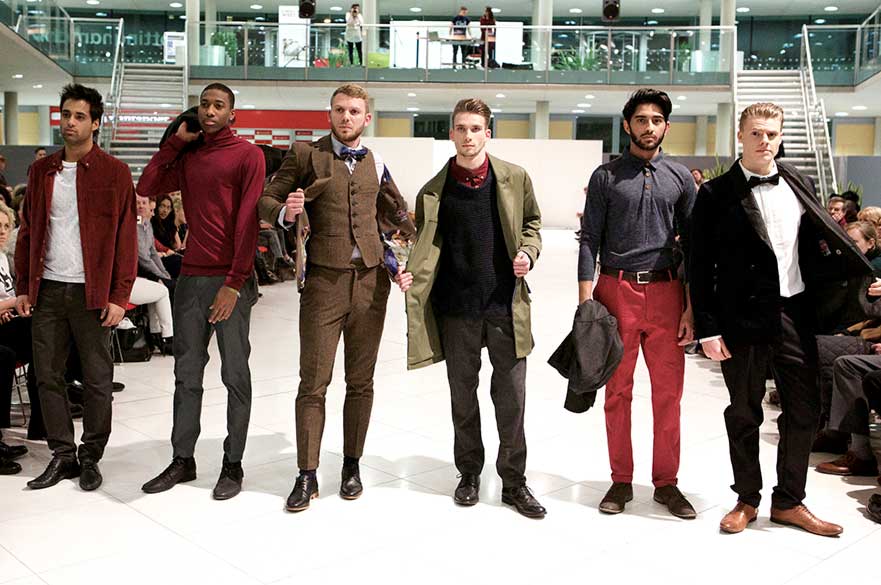 Executives from Ted Baker were wowed at a catwalk show arranged by students from Nottingham Trent University to showcase work they had designed and made.

For their first menswear project, second year Fashion Design students from the University's School of Art & Design worked with Ted Baker to create collections for the concept Ted's Travels.

As a step forward from their first year studies, which teach research, pattern cutting and garment construction, second year students were challenged to apply their knowledge to a commercial, industry focused project incorporating professional practice.

They were asked to create a collection of six or seven outfits for an autumn / winter range which reflected the brand's ethos and a metaphorical journey on the Orient Express – drawing on inspiration from its original journey which ran from Paris to Istanbul.

The glamorous idea established the perfect backdrop for the design students to create luxurious collections which could span from day through to night.

Each student had to make three garments – one jersey, one trouser, and one outerwear piece (jacket, coat). As part of their learning outcomes they were also expected to create a look book, presentation and portfolio, including market research, illustration of line-up, and promotion.

As part of this process, they arranged a catwalk show for Ted Baker executives, store personnel and fellow students to showcase their work. A group of students formed a committee to organise the show, presented on 14 March.

Elisha Diamond, who was on the organising panel, said: "We wanted to do the show to help to raise money towards our final year shows next year. We put a lot of work into it and we managed to get the creative director of menswear from Ted Baker, as well as their head of menswear and head of shirts to come along.

"We carried on the concept of a journey on the Orient Express and had suitcases and different props which linked it back to travel. We also did all the tickets and branding based on travel and had a guy at the front stamping all the tickets. We also made little tags for the seats like travel tags which said thank you for joining us and we hope you have a nice journey. It was a lot of work but the show was worth it."

After viewing all of the collections, the Ted Baker executives at the show selected a winning team who received a Ted Baker goody bag and a work placement as part of the Ted Baker design team. The winning team was made up of Yvonne Shu Anna Edgerton, Leisa Hughes, Lili Liu, Eleanor Northway, and Stephen Neul.

Leisa said: "Our inspiration was mainly travelling, so looking at trains and the cities included in the Orient Express travels. We were looking at 'travelling light', so we had aspects that could be changed. My own outfit included a fold away Mac, which changed into a bag, and running through our whole collection was a Pleat idea that could be filed and changed, which Ted Baker loved."

Feedback from Ted Baker was extremely positive, the team mentioning that they were particularly impressed with the professional staging of the show and the strong impact the collections made on the catwalk. The team said they were inspired by the quality of work coming through Nottingham Trent University, adding that it is very encouraging for the future of the fashion industry.

In fact, they were so taken by the show, Ted Baker's team has also written a blog about it.

Senior lecturer Sue Walton, who ran the project, said that Ted Baker had also commented on the students' "fantastic presentation skills" and said they could not believe the students were second years.