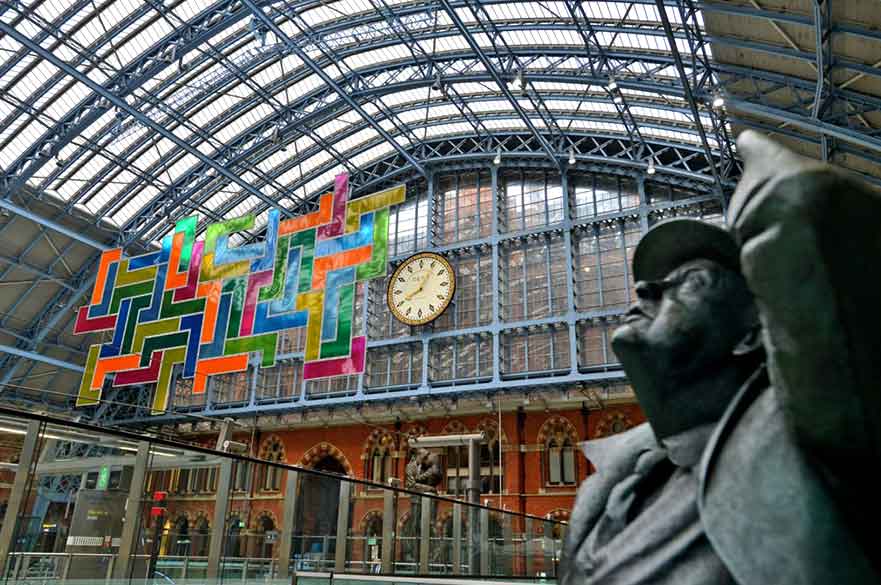 Casting a rainbow of colour across St Pancras International, Chromolocomotion has been created by Nottingham Trent University alumnus David Batchelor. It is the second installation commissioned by HS1 Ltd, St Pancras International's owners, as part of the Terrace Wires series which sees art suspended nine metres above the station’s platforms.

Chromolocomotion follows Lucy and Jorge Orta's hugely popular Cloud: Meteoros in welcoming the station’s national and international visitors. Lucy Orta also studied at the university, where she completed her BA (Hons) Knitwear Design course in 1989. She was also awarded an honorary Master of Fine Art degree from the University in 2007.

Scottish artist David Batchelor is famed for his arresting sculptural installations that marry colour with material leftovers of modern life – from factory scrap to disused or broken domestic items. This latest piece is the largest single artwork to occupy the space under the iconic Barlow Shed roof.

David graduated from his BA (Hons) Fine Art course in 1978.

He said: "I was very happy to make a work for St Pancras, in part because it is such a wonderful building, and in part because the station has played a significant part in my life at least since the mid-1970s. Back then, trains from St Pancras took me to Nottingham from my home in Hertfordshire when I was a Fine Art student at what used to be called Trent Polytechnic."

Nicola Shaw, CEO at HS1 Ltd and Terrace Wires head judge, added: "It is an honour for the station to display such a unique piece of art from a celebrated artist. David is widely known for his wall and floor mounted works of art so undertaking a project of this size was a real challenge."

Both David and Lucy exhibited work at the Nottingham Trent University's alumni exhibition Since 1843: In the Making which was held at its Bonington Gallery to celebrate the city's 170 years of art and design heritage.

Ann Priest, Pro Vice-Chancellor, Art, Design and Built Environment, said: “This year, as we look back at 170 years of art and design heritage in Nottingham, we are also looking forward to the future opportunities for our current students and graduates. It has been fantastic to see the success and achievements of our graduates, and have evidence of the transformative nature of art and design education. It makes us particularly proud that both those artists who have been commissioned as part of the Terrace Wires series are part of our alumni family.”