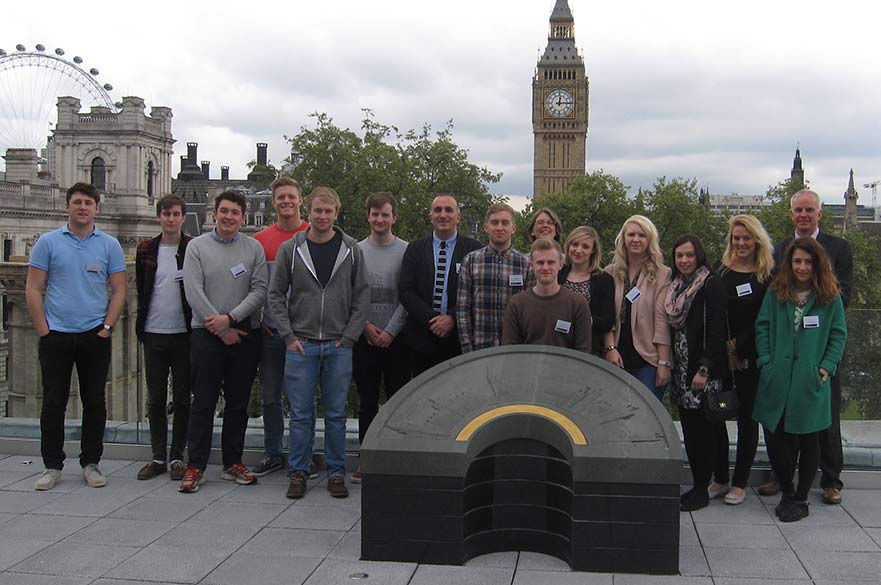 The students visited a number of developments on the first day. This included a visit to Kidbrooke Village; a major regeneration being undertaken by the Berkeley Group, where students met members of the development team and received a presentation on the history and future of the scheme before visiting completed phases.

Afterwards the students paid a visit to The Altitude scheme - a completed apartment development in the heart of the city. Students were given a guided tour of completed apartments by staff from Barratt London, including an NTU BSc (Hons) Planning and Development alumnus. This gave them a chance to see the end result of the development process that they had studied throughout the year.

This was followed by a trip to the South Bank Tower, a project now under construction, with over 25 stories and a further 8 to be added. Students were given a tour of parts of the scheme by a project team from Mace. The former IPC building is now being converted with the existing top storey giving extraordinary views of the city.

The day ended with some networking with NTU alumni with representatives from a range of organisations including Hotel Partners for Africa; The Berkeley Group; Tuckerman Chartered Surveyors; and F&C REIT Management.

The second day consisted of a visit to the Royal Institution of Chartered Surveyors in Parliament Square. Students received a presentation from the RICS Planning & Development group and undertook a Building for Life assessment on existing development schemes. A tour of the building was given, including the roof terrace.

Jonathan Wells, one of the final year BSc (Hons) Planning and Development students who attended the trip reflected on the visit, telling us: "Sitting within the headquarters and listening to very senior people within RICS was a surreal experience, not many pupils will be able to experience that! The hands on trip with excellent networking opportunities is one not to be missed!"