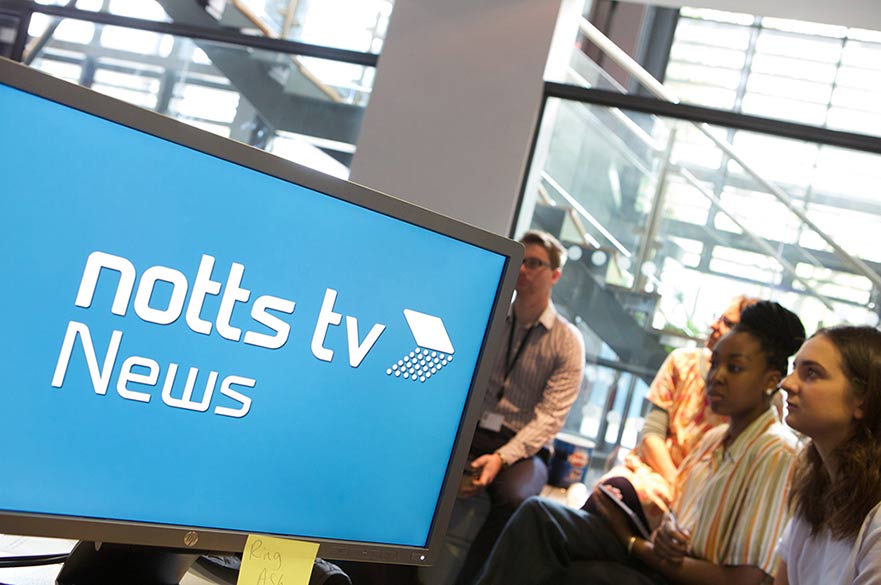 Notts TV's nightly news will be broadcast from the University's Centre for Broadcasting and Journalism, where the team of professional journalists are based.

In a unique innovation, a small group of the highest achieving final year broadcast and print students will spend part of their final year working on the station. As part of their third year course, this group will spend two days a week working with the news team to produce broadcast and online news to professional standards. Master's students and those nearing the end of their 2nd Year will also have the option to carry out work placements, including at weekends and during University holidays.

They will be involved in the whole process, from finding guests and pitching news stories, to shooting and editing. The work they produce will then be used towards University assessment so they will graduate with a degree and a year's work experience.

A dedicated coordinator has now been appointed to oversee student work at the station and ensure it fits in with their course requirements. Deborah Kelly has worked for ITV on its GMTV and Daybreak programmes and for the BBC, as well as at international news agencies Reuters and Associated Press, and as programme editor for Al Jazeera in Qatar.

There is no better way to learn the trade than to work on a professionally run news operation several days a week.

Deborah said: "There is no better way to learn the trade than to work on a professionally run news operation several days a week. The Notts TV news team will be producing one and a half hours of live news per night, including a magazine-style show, which gives the students plenty of opportunity to support them in the newsroom, studio and gallery. They will also be using the same technology as ITV and Sky News, so they will graduate ready to go straight into industry."

Students have already been carrying out placements in the run up to the launch. Oliver Loe, 20, a second year Broadcast Journalism student, said: "Notts TV were really eager to get us involved. On one particular day, they sent me along with one of the video journalists to the City Ground to film the Stuart Pearce press conference as the new Nottingham Forest manager - that was an unbelievable experience."

Holly Jones, 23, MA Broadcast Journalism, also completed a two week placement, and has since gone on to earn regular weekend work with the station. She added: "I've learnt a lot since working with the team. The standard of my work is so much better, and there's so many little tips and tricks I've learnt which save me time while editing. The experience overall has given me a real confidence boost."

Chris Breese, Notts TV news editor, said: "Having students in the newsroom is a great way to support our team. We want their experience to be as valuable as possible and hopefully what we teach them will help to improve all areas of their work and improve their job prospects when they graduate."

Broadcasting on Freeview Channel 8 and Virgin 159, and operating seven days a week, Notts TV offers daily news, sport and weather, as well as a range of quality programmes from music and comedy, to history and documentary. Nottingham Trent University is one of four partners involved in the Notts TV consortium which also includes the Nottingham Post Group, Confetti Media and Inclusive Digital.