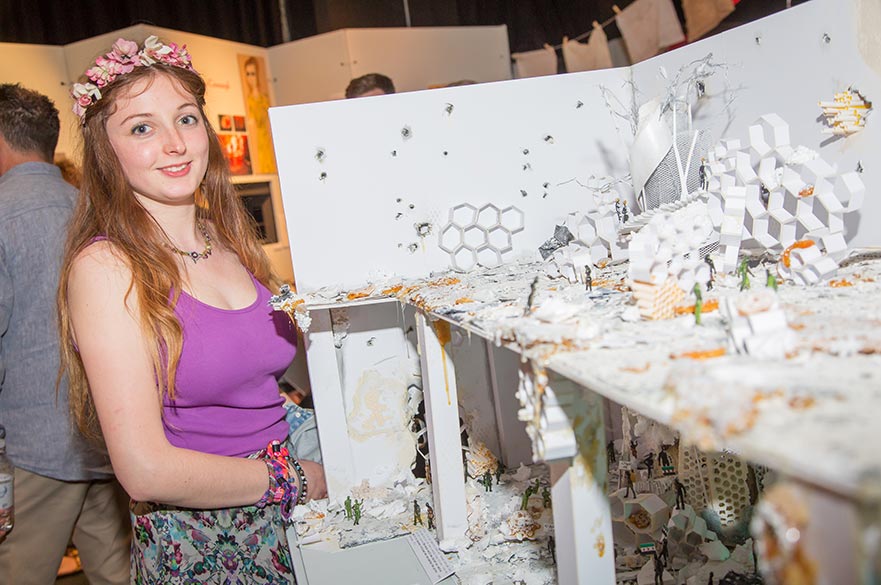 This is the fourth year of collaboration between BA (Hons) Theatre Design final year students and opera director Richard Willacy of Birmingham Opera Company. Richard worked with students on their designs for Mussorgsky's opera Khoranshchina, creating a brief that reflected Birmingham Opera's unique approach to opera and its design process, by allowing students to set their performance in a found space. Richard encouraged students to find an interesting and imaginative place to set the opera in.

Rhian Morris was chosen as this year's winner of the Birmingham Opera Prize, she said, "I reinterpreted Mussorgsky's 17th century opera 'Khovanshchina' within the current crisis in Syria; one that many people choose to be oblivious to. Mussorgsky's beautiful score is contrasted by the violent situation of Russia during an uprising.

I chose to draw upon this in my design; a site-specific promenade performance which transports the audience to a war zone in Syria. I chose to use the motif of honeycomb to make a comment on the futile nature of humanity, who even when confronted by the disaster of war choose to keep on building.

The central feature of the design is the honeycomb tower, or hive, which is inspired by the Tower of Babel – humanity has tried to make a monument to God but it has just ended up being a monument to the achievements of man. The piece is concentrated around the audience’s involvement with the design, especially the honeycomb structures, which would be interacted with by the audience and actors to facilitate scene changes."

Rhian has won the opportunity to be Assistant Designer on Birmingham Opera Company's next production, 'The Ice House'.

Rhian added, "My design for this competition had become an extension of myself and my ideas of the world. To be chosen as the winner of it gives me satisfaction beyond words. It shows that true passion and dedication will be recognised and makes me feel as if my voice has been valued."

Find out more about Theatre Design