A Nottingham Trent University student has designed a record-breaking jersey for a local fundraising cyclist. 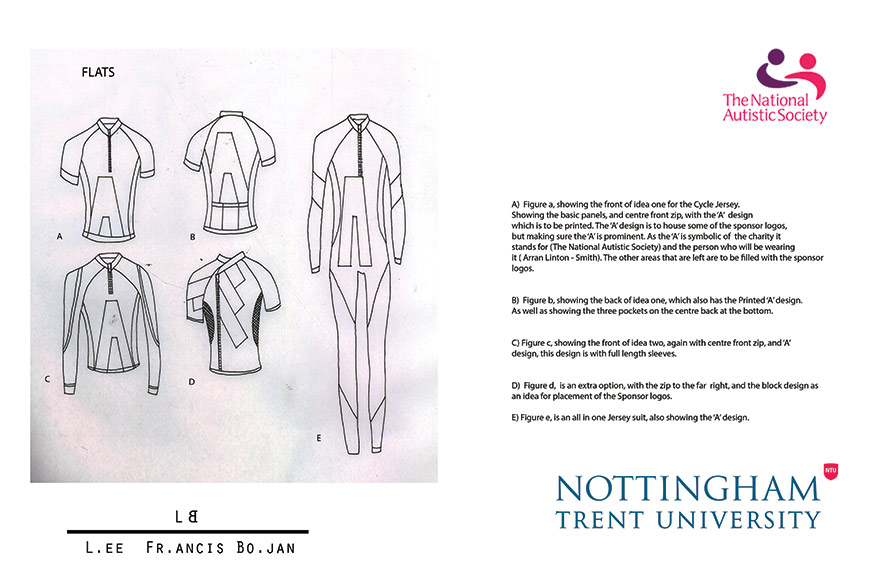 A Nottingham Trent University student has designed a record-breaking jersey for a local fundraising cyclist.

Arran Linton-Smith, who lives in Attenborough, will break the world record for having the most company logos on a single piece of sports clothing when he wears the jersey to compete in the Prudential RideLondon-Surrey 100 on Sunday, 10 August. The current record stands at 89 but Arran is set to smash this – after convincing 106 local and national companies to advertise on his shirt, subject to ratification.

Arran, who has autism, launched his world record attempt in April to show that there's no limit to what people with the condition can achieve and to raise money for The National Autistic Society (NAS).

To help him in his quest, Arran enlisted the help of Nottingham Trent University, asking for students to come forward with designs for the jersey.

Quick to respond was BA (Hons) Fashion Design student Lee Bojan who felt a personal connection to the cause.

"Two of my cousins are severely autistic so I felt a personal connection to this project," said Lee, 31, from Chillwell, Beeston. "I think that's important because when you're getting involved in a design project you need to be passionate about it."

Lee had several criteria he needed to fulfil in his design, including using the colours of the NAS along with a simple approach to allow all the logos to be accommodated. But Lee also wanted to meet the brief Arran had given him – to make it a design which would stand out.

"Arran wanted me to make the jersey interesting. I incorporated the shape of the letter 'A' because it symbolises autism and also the name of the cyclist who’s wearing it."

The jersey has been made by Godfrey Sports in Nottingham who had the task of fitting each logo – including that of Nottingham Trent University – onto the design created by Lee.

Both Arran and Lee said they were delighted with the result.

Arran said: "After so many months of hard work it's exciting to be on the brink of finally breaking the world record.

"As well as raising money for a cause close to my heart, the challenge has always been about challenging the public's perception of autism and getting them to think about the condition more positively. I see it as a privilege to be one of around 700,000 people living with autism in the UK and want to spread this message.

"I was delighted when the School of Art and Design at Nottingham Trent University agreed to undertake the concept design for our World Record cycle jersey. I was looking for a special design which reflected the inspiration which went into this challenge which Lee quickly grasped and developed.

"I am immensely proud of what's been achieved and couldn't have done it without Lee and all the individuals and companies who have supported me on this journey."

Dave Boorman, Head of Supporter Fundraising at the NAS, said: "We've been working with Arran for a long time and have been blown away by the time and energy he's invested in this challenge. Everyone at the NAS is so pleased that he's set to break the world record and look forward to hearing about his next fundraising challenge.

"Without the efforts of fundraisers like Arran and the support of people like Lee, we wouldn't be able to continue our work supporting people affected by the condition and helping them to lead the life they choose.

"Arran and Lee's commitment to making the world a better place for people with autism is nothing short of inspiring."

The Prudential RideLondon-Surrey 100 starts in Queen Elizabeth Olympic Park, then follows a 100-mile route on closed roads through the capital and into Surrey's stunning countryside.

You can also email Arran.