BSc (Hons) Product Design 2014 graduate Alex Ross has been awarded an award of excellence from the Institute of Engineering Designers (iED) for his innovative re-design of the domestic ladder. 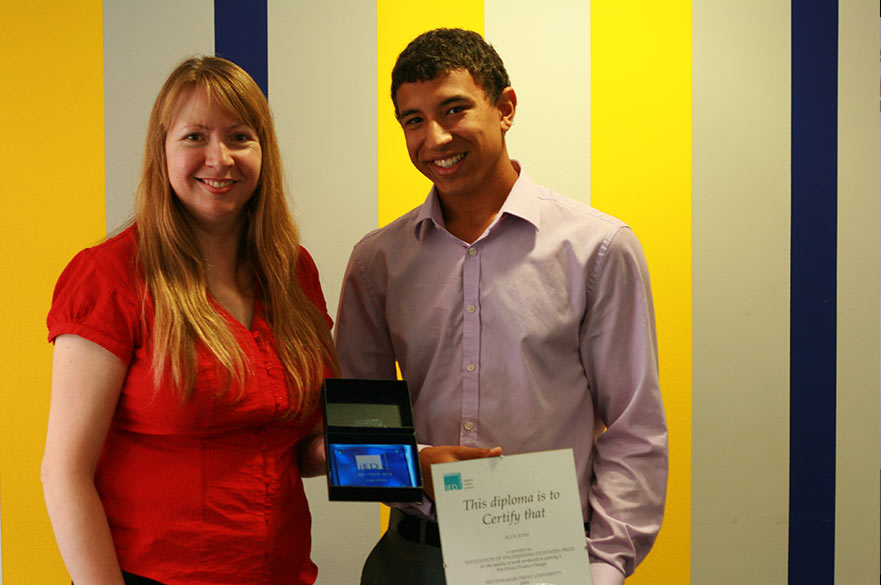 BSc (Hons) Product Design 2014 graduate Alex Ross has been awarded an award of excellence from the Institute of Engineering Designers (iED) for his innovative re-design of the domestic ladder, a design he developed as a student at Nottingham Trent University (NTU).

The iED, which has been running for over 70 years, make annual awards to students on courses accredited by the institution who have excelled in their studies. The iED currently accredits over 60 courses in UK based universities. In order to apply for the award the student must submit an element of their final year work to the institution.

Alex Ross, who graduated with first class honours, chose to submit his re-design of the domestic ladder. A design that implements multiple safety features into a lightweight frame to create a ladder that makes the user feel safer and more secure. Alex was one of nine individuals to receive the award in the UK and received a one year free membership to the iED, a commemorative coaster and a copy of AutoDesk CAD software as his prize. Alex went on to comment: "It was a great honour to receive the IED award, especially as it was from such a prestigious governing body that accredits my course. Furthermore, it was a fantastic achievement for me and a great highlight to the end of my university career."

NTU BSc (Hons) Product Design Course leader Dr Matthew Watkins said: "Alex went to great lengths throughout his research to identify the difficulties that the general public face when using ladders, including an understanding of the fear of heights."

Since graduation Alex has gone on to work as a design engineer for Panorama Antennas. A London based company that designs and manufactures communication antennas. More information on Alex’s achievement will be published in the iED November Issue.