World's first cultural centre for gaming to be opened in Nottingham

The world's first cultural centre for gaming – the National Videogame Arcade (NVA) - is to be opened in Nottingham by GameCity, bringing hands-on experiences of videogames and videogame culture under one roof in a way that's never been seen before. 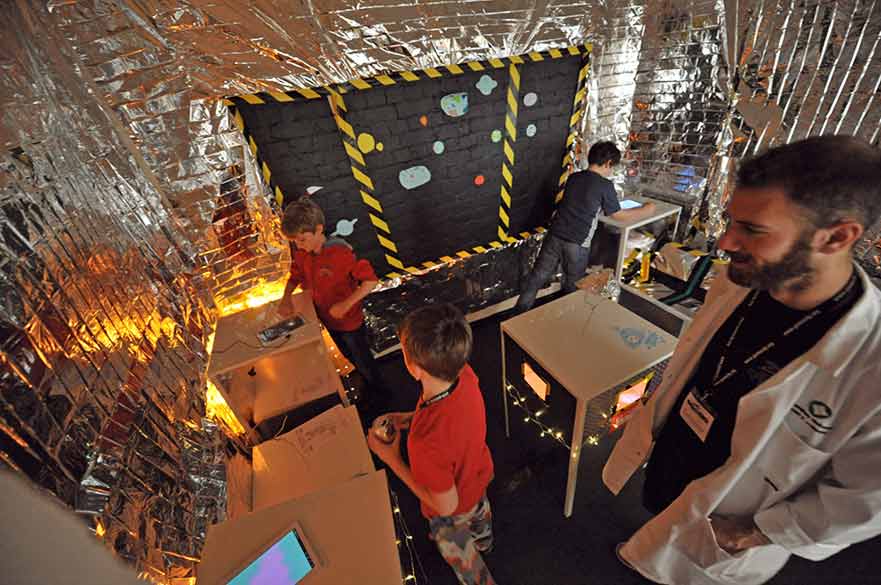 The building is currently in use for GameCity9

For the first time ever, a civic, cultural and academic space will be dedicated to the public's relationship with videogames.

The world's first cultural centre for gaming – the National Videogame Arcade (NVA) - is to be opened in Nottingham by GameCity, bringing hands-on experiences of videogames and videogame culture under one roof in a way that's never been seen before.

From March 2015, the NVA will be housed in GameCity's new premises, the former home of The Midland Group, once an important centre for the visual arts in Nottingham's Creative Quarter, Hockley.

Set across five floors and 33,000 square feet, the NVA will feature:

The NVA will aim to inspire and empower games-makers of all ages and backgrounds and to celebrate the UK's unique heritage as a world-leading innovator in games development.

The £2.5m project will officially open next spring, supported by leading partners Nottingham Trent University, Nottingham City Council and the Nottingham Technology Grant Fund, and the Confetti Institute of Creative Technologies. Nottingham City Council, negotiating the lease on the building and ensuring that grant funding was accessed, was instrumental in GameCity's ability to locate the project in the City as an important new addition to the Creative Quarter.

It is thought that the new attraction, which will also house a shop and cafe, will initially create 14 jobs, with potentially more to come in the future.

Since 2005, GameCity has worked in partnership with Nottingham Trent University to bring videogames to the widest possible audiences through the GameCity Festival and GameCity Prize. Its aim is to celebrate games as accessible, cultural, visionary and enduring pieces of work made by creative people with diverse skills, ambitions and imaginations.

GameCity director, Iain Simons, said: "For the first time ever, a civic, cultural and academic space will be dedicated to the public's relationship with videogames. GameCity is a place for people to play together; to discover and create games regardless of age, gender or background. We believe that games should be played by everyone and that games should be made by everyone. Our accessible city-centre location is a crucial expression of that aspiration."

The NVA will also act as a research hub for videogame culture and will work to make digital creativity accessible to everyone; to inspire and develop the game-makers of tomorrow. There will also be a focus on family learning and education outside of school and a percentage of the money from ticket sales will be given to a new GameCity Scholarship Fund and donated to educational programmes.

Ian Livingstone CBE, government creative industries champion, will sit on the NVA's executive advisory board and visited the building during the festival. He said: "For the millions of people who love them, it's only natural that videogames should have their own, permanent cultural home. Just as fine art enjoys the National Gallery, performance has the National Theatre, and film and music have many permanent spaces that celebrate them - it's fantastic news that GameCity are pioneering this vital and much needed new space.

"Videogames have an important role to play in our economy, our education policies and our cultural lives - so while it's taken a long time to arrive, I can't wait to visit the first ever National Videogame Arcade, and I am absolutely delighted to sit on its executive advisory board."

Professor Murray Pratt, Dean of the School of Arts and Humanities at Nottingham Trent University, said: "In addition to providing an educational resource, hosting the National Videogame Arcade will bring an important collection to the heart of the creative quarter. Students researching our recent cultural history will be able to investigate the part that video games play in the contemporary world. Nottingham truly is game city."

The announcement of the NVA is part of this year's GameCity9 festival, which runs from October 25 – 1 November 2014 in Nottingham. The building will be the main base for the festival and researchers from Nottingham Trent University will study how it is used in order to inform the way the space is shaped as the National Videogame Arcade.

The GameCity building will close to the public directly after the festival, in order to undergo refurbishment ahead of the grand opening in March 2015.

Videogames have an important role to play in our economy, our education policies and our cultural lives.

World's first cultural centre for gaming to be opened in Nottingham