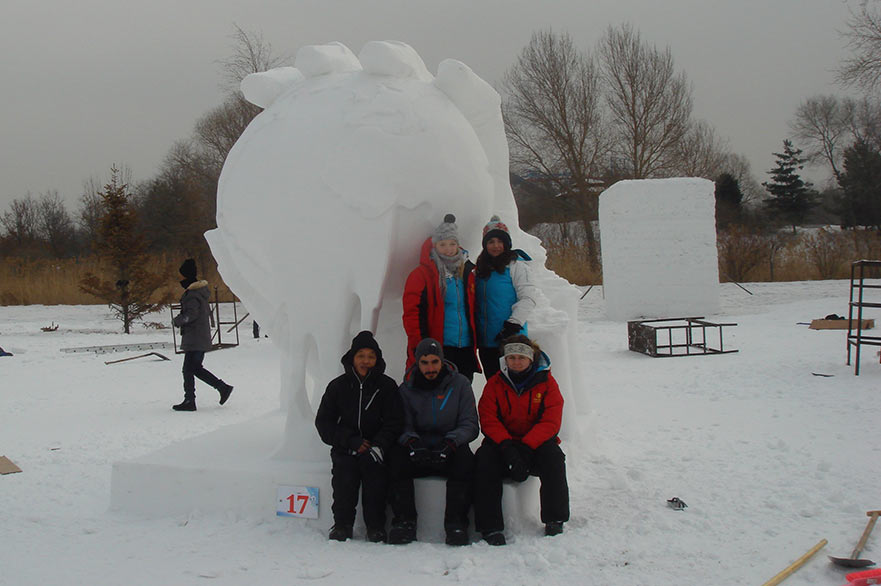 NTU's team for Harbin 2015 in front of Time for Change

The team – including students from the School of Architecture, Design and the Built Environment and the School of Art & Design – won the Creativity Award in the 20th Harbin International Snow Sculpture Competition, held at the Harbin Sun Island Park, and received 3,000 Chinese Yuans as a prize.

Their entry - entitled Time for Change - was of a human hand holding the globe surrounded by power station chimneys, reminding people to take action to avoid global warming.

Professor Daizhong Su, of the School of Architecture, Design and the Built Environment, who led the team, said: "The competition is of a very high standard, and the majority of the participants were professionals, so the creativity award is a great achievement for us."

Days before they also came second in the 7th International University Snow Sculpture Competition, held at the Harbin Engineering University.

This sculpture - entitled The Antithesis – was of a two-sided wall with taps on either side, one overflowing into a bucket and the other dried up, to depict how wealthy people can waste resources while others have to go without.

Professor Su added: "Participating in the competitions are great opportunities to enhance our students' experience of working in international environments.

"To enhance the team's knowledge and skills of snow sculpture, our partner university, Harbin Engineering University, provided valuable support to our team, including giving training and supplying tools. We all worked very hard together and are proud of what we achieved."

They flew to China before Christmas and received snow sculpture training at the Harbin Engineering University's Ice and Snow Sculpture Centre until the competition started.