Final year BA (Hons) Fashion Design student Yeni Park has been awarded second-place runner-up in the 2015 FAD competition final after going head to head with students from across the country at the Fashion Scout show in Covent Garden last week. 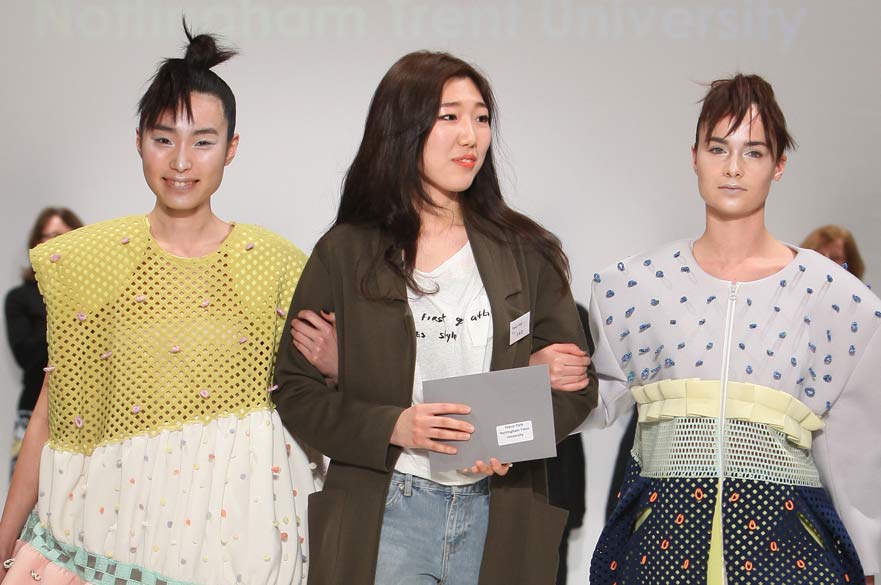 Yeni with her models at the Fashion Scout catwalk show

Final year BA (Hons) Fashion Design student Yeni Park has been awarded second-place runner-up in the 2015 FAD competition final after going head to head with students from across the country at the Fashion Scout show in Covent Garden last week.

Stylists, supermodels and celebrities descended on London for the annual February fashion week where student Yeni Park was flying the flag for Nottingham and NTU, after her designs were handpicked to hit the runway as part of the 2015 FAD competition final.

"I entered the competition in November through NTU. They asked for a sketchbook full of ideas for the designs, including final illustrations and drawings." said Yeni in an interview with the Nottingham Post last week, who is originally from South Korea and currently lives in Nottingham.

Now in its 14th year, the FAD Competition is held annually and challenges fashion students from universities around the UK to design two full outfits, looking at art, culture and social trends as inspiration. This year’s theme was physics, with the students having to take on a scientist's approach to their designs.

Yeni said: "I researched a lot about physics and I'm especially fascinated by atoms and how they repeat in different ways. For both outfits, I created fabrics using a small rope loop. The first outfit was a pink dress, with a curvy and wavy silhouette. The second outfit has a blue jacket – I wanted the colour palette to be soft but with a hint of neon."

The final 17 selected young designers showcased their designs at the Fashion Scout catwalk show last week where they competed for the top prize of £1,000, as well as securing a placement within the fashion industry.

Yeni, alongside Francesca Phipps from De Montfort University were announced as runners-up and both won £500 each. London College of Fashion student Juniper Lai was awarded the top prize for her menswear collection which translated the Physics Meets Fashion brief into an eye-catching mini collection of oversized, layered silhouettes and fabrics created with up to the minute 3D sintering technology.

Yeni said: "I didn’t expect to be a runner-up because all the work at the show was really professional. I had heard that the FAD Competition is prestigious in the UK, so I felt proud of myself and pleased with my choice to come to the UK and study fashion at NTU.

"The fashion show held at London Fashion Week last week was really exciting! All finalists had to get there one hour before, and we were interviewed by the Press and posed for photographs. My parents came to London to see me and the show from South Korea which made me more excited and happy.

"I worked hard during the winter and I was exhausted as I had lots of work to do and limited time before the hand in. I focused on this competition and my tutors always supported me and gave me brilliant ideas and suggestions. Finally the hard work paid off, so I was really happy. Four of my tutors and one technician came to the show to support me. I really appreciate them and I feel really happy that I have greatest tutors and technicians. After I got the prize, we hugged each other and shared that joy. I want to thank everyone who helped me - I really appreciate it."

NTU Fashion Design course leader, Gilly Staples, said: "In their final year we always encourage the students to think about their future and show off their strengths, which is why they enter the competition. It's a great opportunity."

Sean Prince, Senior Lecturer in Fashion Design at ?NTU? said: "Yeni's outfits looked absolutely stunning and were received to a huge increase in camera action as photographers and guests in the audience clicked away.????

"The two outfits had true ‘wow’ factor and represented a brilliant interpretation of the brief and clear evidence of individuality and creativity. We are all very proud of Yeni's achievements and the recognition she deserves for her creativity."

The next FAD Competition will launch in June 2015 at Graduate Fashion Week.