In January, FdA Media Creatives students were set a project challenge, based on the BBC's 'The Apprentice'. Now it its third year, this project is based on a creative brief to design a marketing campaign for a company with Nottingham connections. 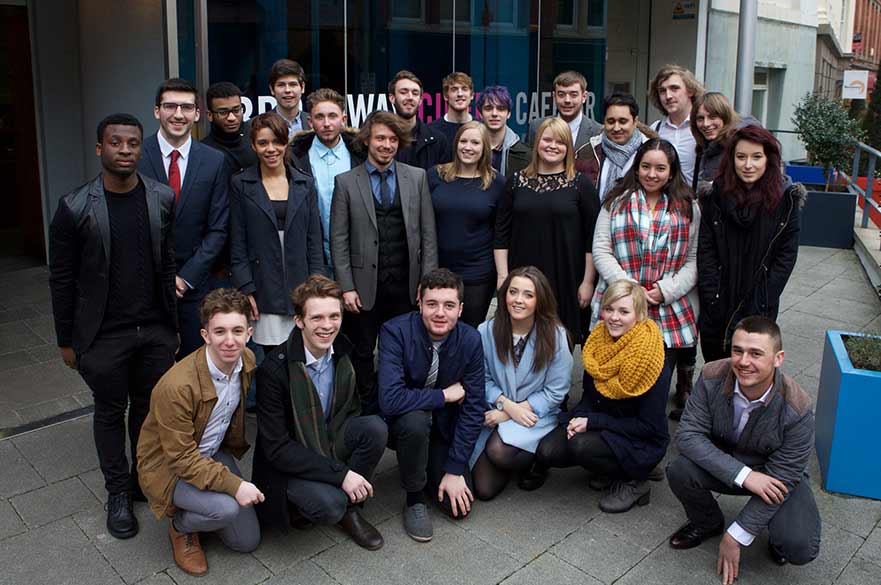 During the first few weeks of January, FdA Media Creatives students were set a project challenge, based on the style of the BBC's The Apprentice television programme. Now it its third year, this timed project is based on a creative brief to design a marketing campaign for a company with Nottingham connections.

Previous projects set have included working for Paul Smith Ltd and Notts TV; this year the team collaborated on a project based around an exciting new National Videogame Arcade, opening in Nottingham in 2015.

The students were split into two teams of 15 and were challenged to put together a branding and promotional campaign for the forthcoming games arcade. They were asked to produce and pitch a logo design, printed promotional campaign work, a promotional video and a social media strategy to drive awareness of the new centre. Each team then delegated roles and responsibilities across the areas of graphic design, visuals and animation, photography, video and audio production, all of which are areas into which students on the FdA course can ultimately specialise and develop career paths.

The three-week project culminated in a presentation of their proposals to a panel of industry experts in front of an invited audience at the Broadway Media Centre in Hockley.

Representatives from a range of creative businesses within Nottingham sat on the judging panel to decide on the overall winning team. Impressive feedback was given from Makermet, a creative design agency; the Broadway Media Centre; the BBC; Game City and Mayhem Film Festival, some of whom have already taken NTU students on short periods of work placement.

Alex Traska, director of Makermet, and himself a former NTU multimedia student, commented on how impressed he was with the attention to detail that had gone into both sets of student pitches, and the professional way that both teams responded to in-depth questions from industry panelists after their presentations.

Chloe Smith, representing Game City, who are working on the development of the National Videogame Arcade in Nottingham, said: "It's an incredible achievement that both teams managed to answer so much of the brief in a total of just three weeks from beginning to end. They should all be very proud of themselves. In choosing the winners, Team Mario, we were particularly impressed by the development and consideration of the logo, which lends itself to use on multiple levels and platforms."

Emily Deck, who was in the winning team, was given an award for the best presentation at the event. She said: "I really enjoyed being a team player in the project. It felt amazing to be in the winning team and I felt so proud that we all pulled together to make it work and produce something that Game City might want to use! It feels like such a huge victory when I have only been doing media for two years. Having the chance to do the project teaches you a lot about how you work with others, as well as making you feel like you have achieved something on your own."

All students involved gained from being able to make useful industry contacts, and valuable experience of taking part in a live creative brief. The winners enjoyed a range of prizes, including a special cinema screening event at the Broadway Media Centre, vouchers and goody bags.