On a cold evening at the Meadow Lane stadium, both the Women's and the Men's football teams from the University of Nottingham and NTU came together to play for two points in the 2015 Varsity series. 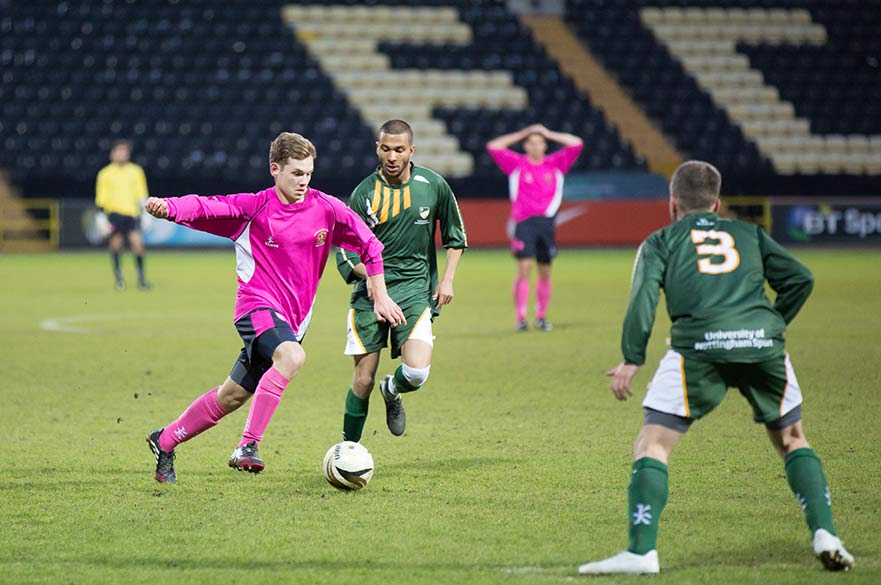 On a cold evening at the Meadow Lane stadium, the Women's and the Men's Football teams from the University of Nottingham (UoN) and NTU came together to play for two points in the 2015 Varsity series.

The women's game started off carefully but with good pressure from the NTU side. Both teams were initially defending solidly, with chances being created for NTU by Demi Greenan, Sam Burton and Charlie Griffin. Shannon Smith (UoN) made some very hard challenges, showing how much she wanted the win, but she somehow did not see a card.

The opening goal came from a quickly taken corner, played short to Griffin whose fantastic delivery into the box was eventually put in from short range by Emma Hollingsworth to make it 1-0 to NTU. Greenan continued to make chances for NTU with some very well taken free kicks and corners. The equaliser came for UoN came through a rebound from a shot hit from a long way out and finished by Lauren Felia to make it 1-1.

The first half ended level, but NTU got off to a great start in the second, with a long range attempt from Greenan finding its way into the back of the net making it 2-1. Greenan was involved again as she created NTU's third with a brilliantly delivered corner which found its way to Laura O'Neill who finished to make it 3-1.

In the 54th minute, the game was put to bed by another close range effort by number 15 from a good delivery to make the score 4-1. The rest of the game yielded a number of chances for both sides with UoN taking a step towards an unlikely comeback with a fluke goal in the 74th minute. What looked like a cross into the box soared over the NTU keeper to make it 4-2. After this, the game opened up a little more, but with tired legs on the pitch, there was little further action. Final score 4-2 in NTU's favour.

The Men's match began pretty evenly with UoN winning an early corner but it was dealt with well, and NTU's number 11, Curtis, putting a long distance shot just over the bar. NTU had a number of good chances including a corner and a great move down the left with Curtis and Jelley combining but still no goal. Throughout the first half a lot of great defending came from the UoN number 4 who shut down a lot of attacks down the right hand side.

UoN had more clear cut chances, with the best coming from a break down the middle that was cut out thanks to an amazing last ditch sliding tackle by NTU's Hayes. However, UoN then found the back of the net moments later when a lack of communication at the back allowed UoN's number 7 to place the ball into the bottom left of the NTU goal.

NTU fought back determined to get an equaliser and found room with more breaks down the left flank. Eventually, 39mins in, we get our goal when a brilliant cross-field pass from Nash found our captain, O'Malley, who slotted it into the bottom left corner.

Half-time substitutes 18, Gilson and 16, Junkovic made an immediate impact for NTU as Gilson got a shot away that tested the UoN goalkeeper.

Alessandro Barcherini, the NTU manager, then made a further change as he sent on winger Reid into the game to try and improve our attacking prospects, and NTU got their rewards on 70 minutes as the ball fell to Nash on the edge of the UoN box, who fired a shot from 25 yards out straight into the corner of the goal.

The last 5 minutes were a bit nervy with UoN attacking well, but when the final whistle eventually came the NTU fans ran onto the pitch to celebrate with their team. Final score 2-1 NTU.