Since 1885, Gunn & Moore has been at the forefront of cricket bat manufacture in the UK, but never resting on their laurels they are always looking for ways to stay at the cutting edge of cricket bat design. 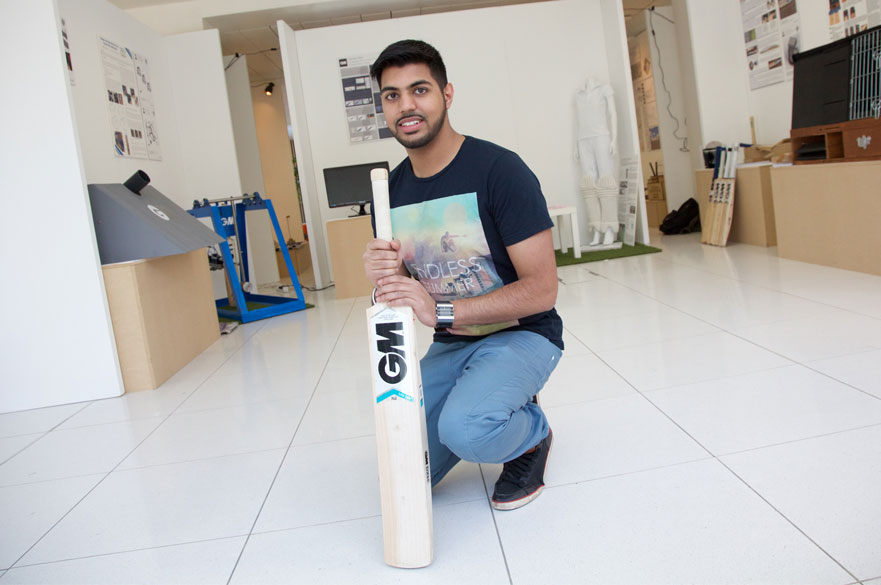 Harneel presenting his work at the Graduate Design Show

Since 1885, Gunn & Moore has been at the forefront of cricket bat manufacture in the UK, but never resting on their laurels they are always looking for ways to stay at the cutting edge of cricket bat design.

"Although our revolutionary DXM technology already puts us ahead of our competitors in the bat-making process" said Peter Wright, "it is also good have fresh young minds looking for ways to improve our performance."

22-year-old Harneel was particularly interested in GM's scientific approach to the 'sweet spot' of the company's bats and how science can help meet the needs of different player characteristics and the requirements of different types of wickets.

"Any cricketer can tell when he's hit the 'sweet spot'," said Harneel, who is studying at the School of Architecture, Design and the Built Environment. "Not only does it feel and sound different, but the ball goes much further!

"I've always been a keen cricketer myself, but I never thought researching the 'sweet spot' scientifically would be part of my degree."

Harneel, originally from Leamington Spa, undertook a finite element analysis of cricket balls hitting the GM's full size Six6 bat, as used by Joe Root, in order to understand where the bat was put under the most stress, and how this stress dissipated over the wood.

The analysis was part of a wider project on bat design generally but the tests also confirmed that the sweet spot on the Six6 was 19 centimetres from the bottom and sent the least vibrations to the batsman; thus producing the maximum exit speed for the ball.

"We appear to have confirmed the science behind the sweet spot and where it's scientifically best on the bat to strike a ball," said Alan Crisp, head Product Design at the University.

"And we're certain that – combined with other factors such as the batsman's swing, his timing and the wickets being played on - it can help cricketers, along with GM's exclusive Bat Selector, find that elusive 'sweet spot' and the best bat for each of them individually.

"But what's impressive is how this data can be used to help improve the way cricket bats are made. Harneel has shown us that by taking GM's DXM scientific approach, combined with the University's design methods, we can identify how the traditional cricket bat can be modernised and improved."

Harneel's work will go on public display alongside a host of other student design works during the 2015 NTU Degree Show at the University's City site from 29 May to 6 June.

The annual shows repeatedly feature graduating students who go on to claim prizes at some of the most prestigious competitions in the UK including top awards at Graduate Fashion Week, New Designers London, D&AD and Free Range.

Dr Matthew Watkins, course leader for BSc Product Design at Nottingham Trent University, said: "Harneel has undertaken a thorough analysis of the way cricket bats respond under stress in order to understand how they might be improved.

"Not only is this a good example of how we can work closely with an internationally recognised local business, it's also a great example of how science can be combined with traditional craft making to create improved products."