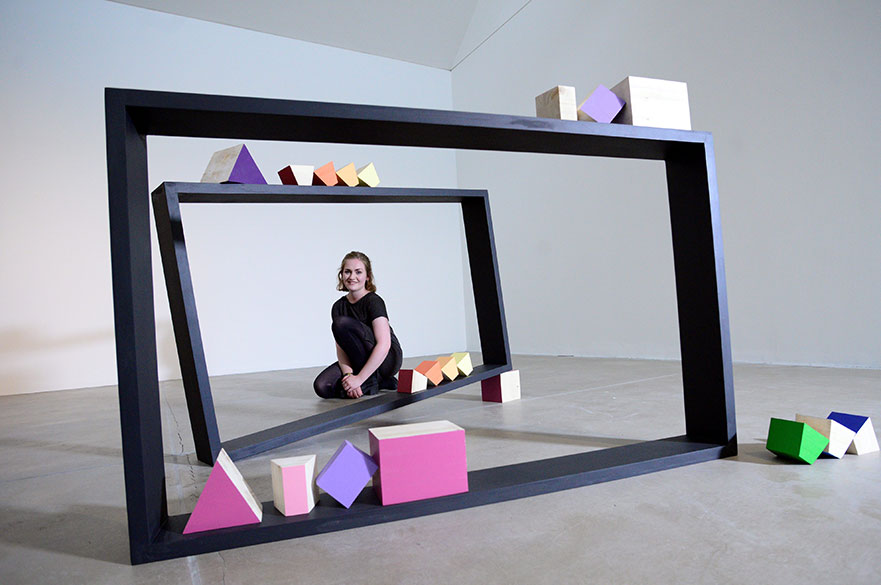 Kayt was awarded the £20,000 first prize at an award ceremony on 2 July 2015 held at BALTIC 39, a contemporary art hub in the heart of Newcastle.

Additional prizes of £9,000 and £6,000 were awarded to Jacob Watmore of Central Saint Martins College and Queenie Clarke of Camberwell College of Arts. A £5,000 judges' discretionary prize was split between Martin Darbyshire of Leeds College of Art and Jadé Fadojutimi of Slade School of Fine Art, UCL.

Mr Woon's son, Jeremy was guest of honour at the award ceremony and presented the first prize to the winner. Kayt said: "I'm still in shock – the fact that I have won is still sinking in. This is the most incredible thing that could happen to me."

Being an artist is an important thing for society. I'm proud my life is now dedicated to that. I've followed my heart and doing something I love.

Describing her work, Manchester-born Kayt added: "The sculpture was inspired by a piece of music I improvised on saxophone. I kept playing some wrong notes and drew a scale of these notes using maps, lines and colours, which was the foundation for the work.

"Being an artist is such an important thing for society. I feel very proud that my life is now dedicated to that and that I've followed my heart and I'm doing something that I love.

"I plan to stay in the North East as it's a really exciting and creative place to be. I'm going to grasp this chance will both hands and focus more than ever on my work. I want to keep developing and make the very most out of this chance."

Having won, Kayt will have access to dedicated space in the BxNU institute at BALTIC 39 for the duration of the Fellowship as she works toward a solo exhibition and publication. Kayt will also receive critical and professional development support from a mentor.

Mr Wee Teng Woon, said: "We are delighted that the Woon Foundation Art & Sculpture Prize has now entered its third year and continues to inspire final year art students from across the UK to achieve academic excellence in their chosen discipline – we congratulate this year's winner Kayt Hughes, and hope this prize inspires her as she progresses to the next step in her career."

Since its launch, the competition has attracted some of the UK's most exciting artists and this year was no exception, with an impressive range of entrants from across the country.

The finalists were 12 of the most talented emerging artists in the UK, studying at some of the nation's leading art establishments.

Professor Christine Borland, Northumbria's BALTIC Professor and Turner Prize-nominated artist who facilitated the judging panel, said: "The selection of this open submission prize; with all the judges making nominations, means we see a unique cross-section of undergraduate painting and sculpture, exhibited in the beautiful spaces at BALTIC 39. The prize-winning works this year look outstandingly strong, congratulations to all of the artists, this is a great start to their careers."

Work by the shortlisted artists will remain on display at BALTIC 39 until 2 August.