Top bosses from national and regional news organisations have recognised the professional quality of work by Nottingham Trent University journalism students at an annual awards ceremony. 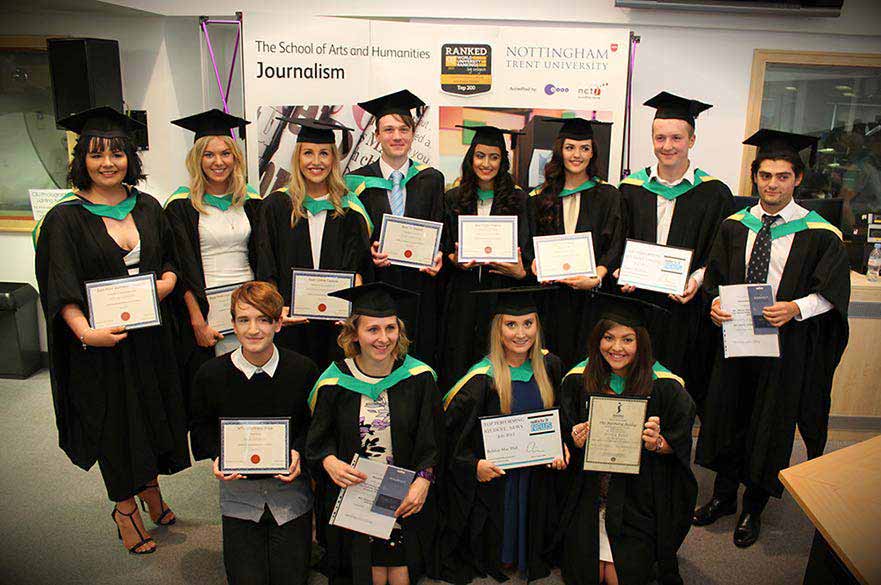 Centre for Broadcasting and Journalism prize-winners

Top bosses from national and regional news organisations have recognised the professional quality of work by Nottingham Trent University journalism students at an annual awards ceremony.

Seven industry leaders from print, online, radio and TV newsrooms were invited to judge the final-year features and portfolios of students graduating from the University's Centre for Broadcasting and Journalism (CBJ).

Mike Blair, who is Executive Producer at ITV's factual production company Shiver, awarded the prize for Best TV Feature to Savanna Nolan for her documentary on the state of mental health provision in prisons.

It's great to see strong local journalism being done well.

He said: "It was an extremely difficult choice but this feature showed great journalistic instinct. It is incredibly difficult for journalists to secure access to stories about the prison service let alone interview people who have or have had severe mental illness. This piece had it all."

Awards were also presented to two journalism students who have been working as interns for Notts TV, which this week launched on Sky channel 117, as part of an innovative Journalism at Work module throughout their final year of study.

Jessica Twist, from Worcestershire, won the Soroptimist Award from Nottingham Soroptimist Society Club President Audrey Jones, for her feature exposing the hardships of women and girls working in the modelling industry.

The final award, described as "bitter-sweet" by CBJ director Carole Fleming, was made in memory of long-serving CJB engineer Steve Coates who died suddenly in November 2014. Steve had been a dedicated member of staff who had helped design and build CBJ's student newsroom, radio studios and TV gallery and studio, which are also home to Notts TV.

For me the most important thing is the ability to tell a story well and these portfolios demonstrated that.

Course rep, Elana Campbell, from Bristol, received the award for her exceptional work in helping other students and in supporting the course throughout her three years of study.

BBC Radio Nottingham's acting News Editor, Lewis Scrimshaw, said: "Asking difficult questions which people don't want to answer is very important in society and we need more young journalists with the training and skills to do this."

Mike Sassi, Editor of the Nottingham Post, said: "For me the most important thing is the ability to tell a story well and these portfolios demonstrated that."

Journalism courses at Nottingham Trent University were recently ranked in the top 200 in the world in the QS World University Rankings® by Subject, while the Print Journalism degree has been voted Best Performing National Council for the Training of Journalists course for three years running.