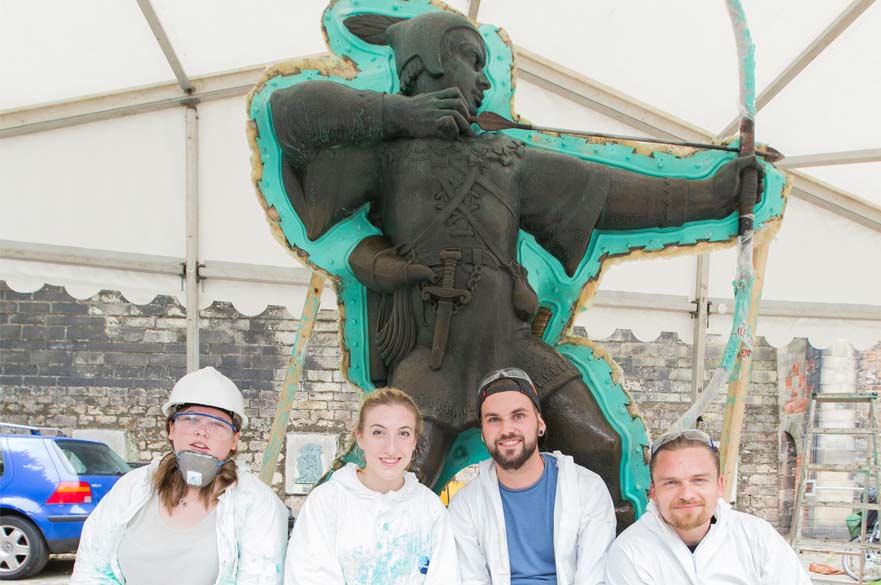 The world-famous original statue of Robin Hood was created by sculptor James Woodford in 1951. The folklore legend of Robin Hood, an heroic outlaw who robbed from the rich to give to the poor, is known around the globe. Since Errol Flynn first appeared as Robin dressed in his signature green tights in the 1938 film The Adventures of Robin Hood, a long list of actors have depicted Robin's story and life on screen and television over the years, including Kevin Costner, Russell Crowe, Sean Connery, Michael Praed, Cary Elwes, Jonas Armstrong and John Cleese. The story has also been made into two feature length Walt Disney films, a Bugs Bunny cartoon film, and full length versions in Russian and French.

Using the mould the team had produced, Richard, a specialist in flexural composites and the recreation of synthetic organs and tissue for educational purposes, then worked for several weeks to cast a perfect replica of the statue in a bronze and fibreglass composite. The statue is a complete copy of the original, from the detail of Robin's arrowhead right down to the original sculptor's signature on the base.

Robin Hood's twin statue finally arrived at Nottingham Trent University's Newton building on 30 September, creating huge interest and attention, and celebrated by an official unveiling, attended by members of Nottingham City Council, representatives of NTU and the wider Nottingham community, as well as Richard Arm and his creative team.

After spending a week on site in the Newton building, the second Robin Hood statue is destined for Nottingham's sister-city of Ningbo in China, where it will be gifted to the people in November 2015 as a lasting token of friendship and collaboration, marking ten years of the relationship between the two cities.

Professor Edward Peck, Vice-Chancellor of Nottingham Trent University, said: "Nottingham Trent University is delighted to have been able to utilise its unique local expertise and experience in art and design in support of the City Council's developing relationship in China, and in particular in Ningbo, where we are finding that the UK's past and potential contribution to the creative industries is especially prized."