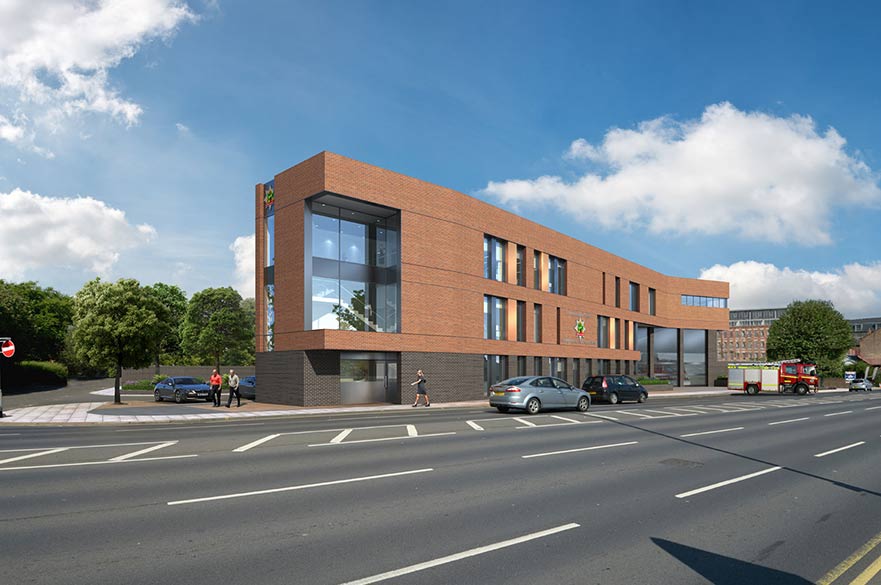 Architects impression of the future building

Members of staff and students coming into Nottingham Business School (NBS) from the south along London Road may have noticed a new building emerging on the site next to the converted Hickling factory on station street, which was converted to residential accommodation a few years ago.

The building is a new Fire Station and the architects impression of the future building is shown above. If you look carefully, the Hickling building is in the background.

The new building is a result of a comprehensive review of fire and rescue services carried out in 2010-2011, which led to a reconfiguration of services across the city and county. This reconfiguration will also see the de-commissioning of the central fire station currently opposite the Newton and Arkwright buildings on South Sherwood Street and Shakespeare Street.

The Fire Cover Review was based on a comprehensive reassessment of the risks to people and communities across Nottingham and Nottinghamshire. Throughout the process, two NBS members of staff, Pete Murphy and Kirsten Greenhalgh (the latter now at the University of Nottingham), advised Nottinghamshire Fire and Rescue Services.

Pete and Kirsten acted as consultants to the review, and validated the risk assessment and evidence upon which it was based. The project also formed one of the Research Impact Case Studies submitted by the NBS as part of the Research Excellence Framework in 2014.

Frank Swann, the Chief Fire Officer at the time of the review, commented "NBS gave us independent scrutiny and advice knowing both the local and national contexts. They completely understood the history, culture and antecedence of NFRS and provided both knowledge and expertise while working seamlessly with our project team."