Failed injections could be reduced after researchers developed a way for smartphones to be used, hands-free, to locate veins in people's arms. Failed injections could be reduced after researchers developed a way for smartphones to be used, hands-free, to locate veins in people's arms.

Researchers at Nottingham Trent University say their design is a low-cost way to help clinicians with difficult injections, such as those on small children or people with a fear of needles.

"Intravenous injections are one of the most routine, invasive medical procedures in the world, but it can be difficult to find and puncture a suitable vein," said Professor Amin Al-Habaibeh, professor of intelligent engineering systems, who led the project. 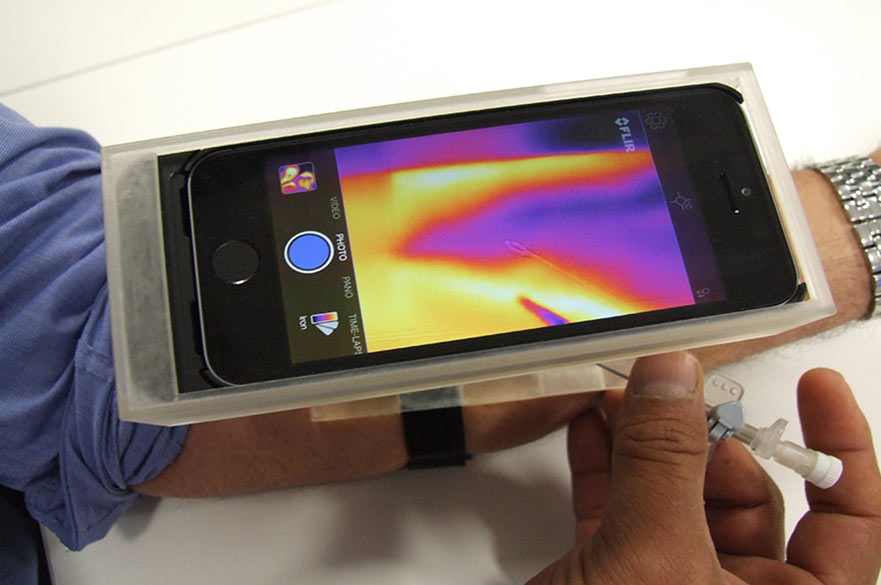 "Inserting a cannula, for instance, can be distressing and painful if multiple attempts have to be made before a needle is positioned correctly.

"Existing vein locators can be specialised and expensive. But this is a simple idea which has the potential to make a significant impact on the way injections are administered around the world.

"By providing clinicians with a simple, cost-effective way to use smartphones to highlight veins, we could save valuable time and money while also making things easier for patients."

The design – which is patent pending – has been proved using a 3D printed prototype which is fitted to the patient's arm with a strap that also acts as a tourniquet.

A simple modification to the smartphone camera is required by fitting the lens with a near infrared filter and adjusting the flash to the correct frequency. The modified smartphone is then inserted into the holder, allowing the clinician to see the veins without having to hold the phone steady.

Alternatively, off-the-shelf low-cost infrared cameras can be plugged into the smartphone and a cold press can be applied to reduce the temperature of the patient's arm to make the veins more visible.

Marie Boes, the research assistant who developed the 3D printed prototype at the University's School of Architecture, Design and the Built Environment, said: "The use of 3D computer aided systems combined with 3D modern printing technologies allowed the idea to be developed into a prototype in a very rapid way in less than a week.

"As smartphones become more widely available, we can utilise their potential in previously unimagined ways to improve the experience of patients and save doctors, nurses and others valuable time and money."