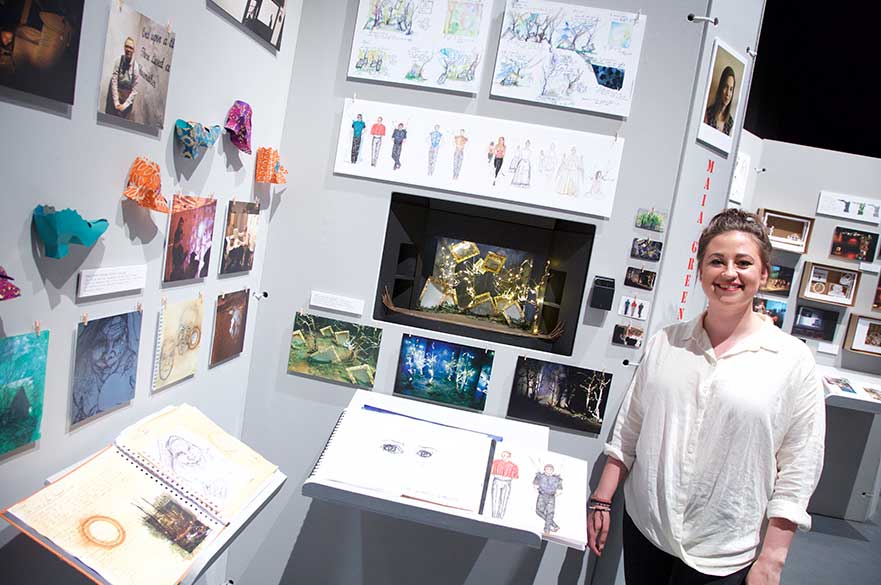 Paige stood with her work.

Nottingham Playhouse has worked year-on-year with NTU's Theatre Design students to create realised models for a wide selection of plays. This year the students were asked to create a set design for the play The Duchess of Malfi by John Webster. The play begins as a love story, with a Duchess who marries beneath her class, and ends as a nightmarish tragedy as her two brothers exact their revenge, destroying themselves in the process.

Paige explained: "My Design was a stage full of mirrors and trees which were over grown and organic. The Duchess of Malfi is about deception and I took the theme of ‘Hell on Earth' as my inspiration. I looked into how hell was perceived and I realised that finding a place which you could manipulate, like woods which could be beautiful yet scary, was the perfect place for the play.

"I wanted to convey the veil of lies the characters told each other, and to show the atmosphere of the play. Seasons, spring through to winter, tracked the emotions and atmosphere of the play as it darkened throughout time. Actors would appear in the mirrors at time of deception so that the audience would feel manipulated too."

Paige was presented with the prize by Associate Director, Fiona Buffini, and will begin a work placement with Nottingham Playhouse in early 2016.

Paige commented: "When receiving my award I felt overwhelmed, nervous and excited all at once but very privileged and thankful. Working in a professional environment is exciting, and you always can learn from others. I am still learning, so being part of a creative team is something I am looking forward to, but also being independent and allowing the freedom to design for the stage. It's a great feeling knowing you are going to design for Nottingham Playhouse, and I know I will develop as a designer."

Kate Burnett, Senior Lecturer in Theatre Design at NTU added: "We're thrilled that Paige has won the Nottingham Playhouse Prize as she is a very collaborative designer and will really contribute to the 'company' approach of the Playhouse.