On a crisp autumnal afternoon at the Clifton campus, the Nottingham Trent Renegades got their season off to a fantastic start with a 24-12 win over midlands rivals the Warwick Wolves. 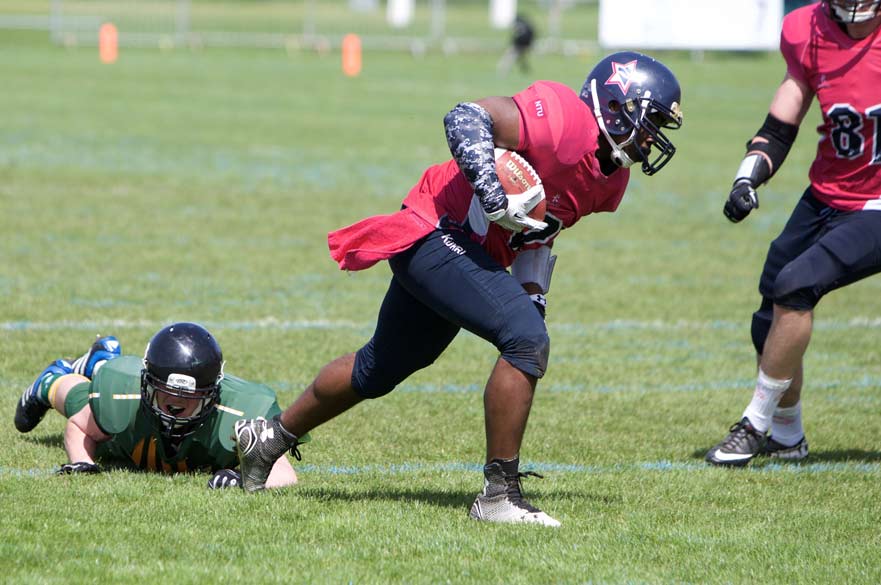 On a crisp autumnal afternoon at the Clifton campus, the Nottingham Trent Renegades got their season off to a fantastic start with a 24-12 win over midlands rivals the Warwick Wolves.

The Wolves' couldn't cope with the Renegades powerful defensive line, and in particular Daniele Chiazza, whose relentless tackling and speed prevented the away side's running game from making any inroads.

In front of a crowd of around 100 people, the game began in sluggish fashion, with both team's offensive lines struggling to contain the opposing line, before the Renegades' blasted into a 7-0 lead with a 40-yard touchdown reception.

The final three minutes of the half would prove pivotal in the victory, as the NTU defence snuffed out two red zone possessions for the Wolves'.

After missing a field goal with three minutes left in the half, a shanked punt at the end of the following Renegades' possession left the Wolves' with another golden opportunity, starting their drive at the 23-yard line. Even after a miracle catch on 3rd and 20 which left the Wolves' on the 7-yard line, the defence would not wilt. Three fantastic tackles later on the two yard line ensured the 7-0 lead was maintained going into the second half.

The second half started in sublime fashion for the Renegades, with quarterback Harris Tzen leading a tremendous drive that started at their own 41. Tzen threw two beautifully floated passes over the middle to leave the Renegades on the Wolves 19-yard line, setting up a powerful run up the left for Abraham Taiwo to take it into the end zone. After the extra point was kicked through, the Renegades led 14-0.

After a quick three and out for Warwick, Tzen found himself under pressure on his own 15 yard line in a 3rd and long situation. Tzen threw right, but it was picked off by the Wolves' cornerback, setting up the drive on the Renegades' 22 yard line. The defence that had stoutly resisted for nearly 3 quarters looked tired at the end of this drive, with the Wolves' persistent running finally paying dividends with a 7-yard run to secure the touchdown. After a failed two point attempt, the score stood at 14-6.

However, the Renegades' responded in ruthless fashion with Tzen throwing an absolute peach of a pass for a 46-yard gain to leave the ball on the Warwick 20-yard line. An 18-yard field goal went through the posts leaving things at 17-6.

Time was running out for the Wolves', who led an excellent drive starting on their own 15-yard line to score a touchdown from a QB run, a play that was consistently nullified by the exceptional defence, led by the impressive Chiazza. The Wolves' were forced to go for another two point attempt, but again the line held strong, the score moving to 17-12 with under two minutes to play.

After a failed onside kick by the Wolves', Tzen put the finishing touches on a hard fought win, a 50-yard reception deep left to the electric wide receiver who carried the ball into the end zone. The touchdown sparked wild celebrations, and, after the extra point was kicked through, the win was secured, a thoroughly deserved 24-12 triumph.