Cameras flown on drones could be used to detect leaking underground water pipes over hundreds of miles of desert, according to new research by Nottingham Trent University. 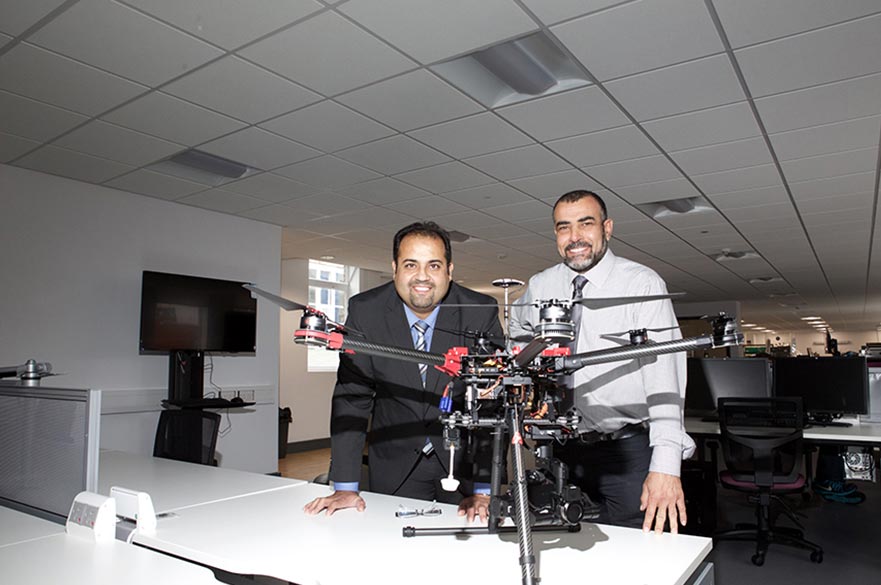 Cameras flown on drones could be used to detect leaking underground water pipes over hundreds of miles of desert, according to new research by Nottingham Trent University.

A study led by Professor Amin Al-Habaibeh, from the School of Architecture, Design and the Built Environment, shows how infrared technology could be used to detect large-scale leaks which are otherwise invisible to the naked eye.

The research – which was presented at the recent Institute of Electrical and Electronics Engineers (IEEE) conference in Jordan – aims to reduce the vast quantities of water which can be lost in large-scale pipes, particularly in arid countries where water is transported over large distances.

"Water is one of the most precious commodities around the world, but significant quantities are lost on a daily basis through leaking and broken pipes," said Al-Habaibeh, a professor of intelligent engineering systems.

"What we are proposing is a non-contact and high-speed system that can be used remotely to detect changes in humidity over vast areas of desert."

The research shows how high and low resolution infrared cameras can be used from height to detect the change in temperature of sand which occurs when leaking water underground evaporates from its surface.

By using GPS, the technology would pinpoint exactly where a leak has occurred to allow for remedial work to be done sooner. Short distances could be covered by an infrared camera attached to a quadcopter drone, whereas for greater distances, an infrared camera could be attached to an inflated zeppelin, which is anchored to the back of a vehicle that is driven along pipeline routes.

The research was developed by Bubaker Shakmak, a postgraduate researcher at the School of Architecture, Design and the Built Environment. A simulation model of the Great Man-Made River in Libya was created for tests.

Mr Shakmak said: "The early detection of leaks would enable water providers in arid countries like Libya to improve their operational efficiency, reduce the potential for the contamination of water and extend the life of facilities.

"This is a non-destructive technology which would provide a cost-effective way of monitoring major pipelines to help avert the large-scale loss of treated and consumable water."