Another major award has been won by the UK's contribution to this year's World Expo in Milan – which drew on honeybee research carried out by Nottingham Trent University physicist Dr Martin Bencsik. 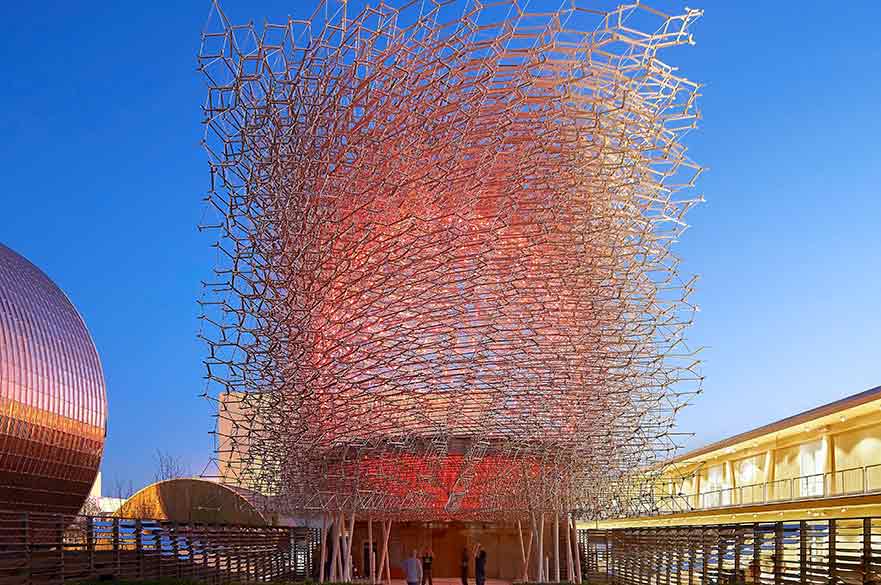 Another major award has been won by the UK's contribution to this year's World Expo in Milan – which drew on honeybee research carried out by Nottingham Trent University physicist Dr Martin Bencsik.

The giant aluminium lattice sculpture, 'The Hive', the centrepiece of the UK Pavilion, won the Best Public Use Project with Public Funding Award at the prestigious Blueprint Awards 2015* at a ceremony in London.

The success comes just after it was awarded a prize for best design and relevance to the overall Expo 2015 theme of ‘feeding the planet, energy for life' by the Italian National Association of Architects, along with Italian national construction and landscape bodies.

The UK Pavilion was designed by Wolfgang Buttress, a fine art graduate of Nottingham Trent University, to highlight the importance of pollination in the food-chain. Commissioned by UK Trade & Investment (UKTI), the structure aims to prompt the visitor to reflect on the links between science, research, nature, creativity and innovation in securing a sustainable future.

Visitors map the journey of the bee, meandering through an orchard and along a wild-flower meadow before entering 'The Hive' - a 14m sculptural, honeycomb inspired lattice, made of 32 layers and 169,000 aluminium components.   The lattice can be viewed from below through a 9-metre spherical void which is hollowed from the centre.

Dr Bencsik, a physicist in the University's School of Science and Technology, uses accelerometers – devices sensitive to minute vibrations – to detect and translate vibrations caused by bees during their activities and as they communicate with one another.

The lighting and soundscapes within the structure are directly inspired by his research, with sounds and an array of 891 LED lights that buzz and pulsate in response to live-streamed signals from a real bee colony kept at Nottingham Trent University.

As well as highlighting the role of pollinators in the food chain, the concept aims to encapsulate  UK strengths and showcase how it brings its world class research, business and international leadership to help meet the global food challenge.

Lyndon Neri, one of the Blueprint Awards* judges, said: "Staying true to its namesake, the project explores the metaphor on multiple levels - from space and experience, to form and graphics, to technology and science - a rigorous form of storytelling."

Wolfgang Buttress said: "I am really happy and honoured to have received this prestigious award. It is a testament to the creativity and skill of the whole team. It was a truly collaborative project where we successfully and harmoniously integrated art, sound, architecture and science."

Dr Bencsik added: "Attending the Blueprint award ceremony was a real eye opener into the extraordinary range of architectural, design and artistic work that had been shortlisted for the 2015 competition. The fact that Wolfgang's work won the category it was shortlisted in is a profound acknowledgement of its quality, especially as it was assessed by a range of nine international, highly influential judges who are world-class professionals in their respective fields."

Countries across the globe have showcased as part of the World Expo, which ends on 31 October.

*The Awards are organised by Blueprint magazine, the authority on architecture, design and art.