The Nottingham Trent University Futsal team bounced back from defeat against Loughborough last week with a well earned victory over a tricky University of East Anglia side. 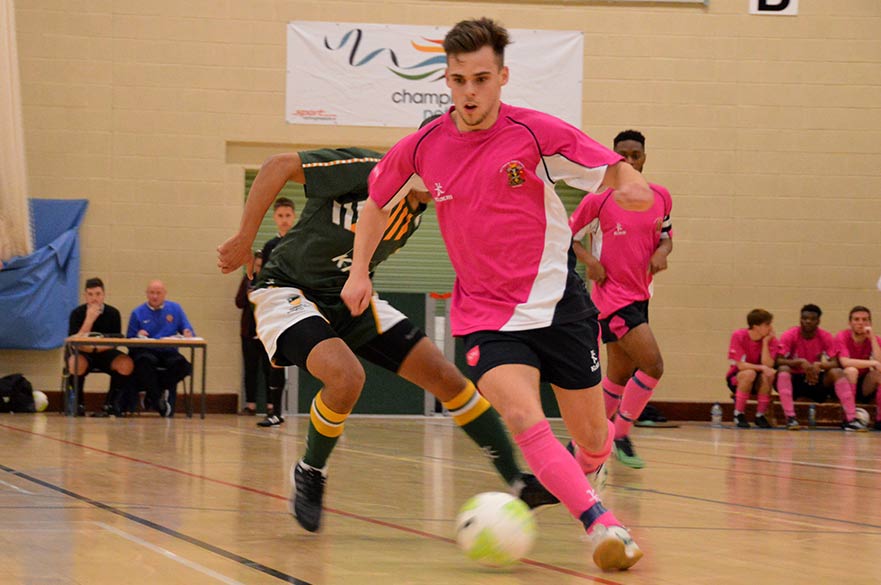 The Nottingham Trent University Futsal team bounced back from defeat against Loughborough last week with a well earned victory over a tricky University of East Anglia side.

The match got off to a good start for an NTU side who looked comfortable in possession, with defensive minded player Aaron Jiwa frequently clearing the ball effectively to keep UEA at bay. The first real chances of the game fell to those in pink as Henry Osei forced a good save out of the UEA goalkeeper before Rafa Rosa hit the post with a long-range effort.

UEA were in possession of the most impressive player on the pitch however, and it was he, their number two, who opened the scoring with a fiercely struck effort from the right hand side past the outstretched arm of Ben Thomas.

With Futsal based around rotating substitutions, NTU were keeping their players fresh throughout the first period and it proved to be an effective tactic as they took the upper hand towards the later stages of the first half. Their pressure lead to them getting the equaliser they needed as Rafa Rosa scored with a venomous strike from the centre of the court in to the bottom left hand corner of the goal.

NTU would have been frustrated to have reached half time with the score at one apiece, having had a number of chances to take the lead – in particular, Jez Ansa squandered a chance to give NTU the lead when through one on one but his effort was struck straight at the keeper.

The second half was a far more open affair than the relatively tight opening to the game, although some woeful finishing characterised the opening stages with, Henry Osei striking efforts across the face of goal.

The magic of Rafa Rosa was to give NTU the edge however, as he scored his second goal from virtually the edge of the pitch with an effort in to the top of the goal. NTU's momentum continued to build as soon after Jez Ansa had a close range shot that was initially saved by the UEA keeper before he was able to tuck away the rebound.

The goals kept flowing throughout the second half as UEA clawed their way back to 3-2 when Ben Thomas parried a shot that was neatly tucked away by their number 10. NTU didn't let the goal stagnate their momentum however, as Rafa Rosa secured his hat trick with a quick counter attack that he converted as UEA were left with only two players defending their goal.

Extending their lead further, NTU capitalised on quick distribution by keeper Ben Thomas to make the scoreline 5-2 and the game looked all but secure. However, UEA would not go down without a fight as Aaron Jiwa gave the ball away which allowed their 13 to slot the ball into the back of the net before they scored another immediately as the 13 again converted from a UEA corner.

With just seconds left to go however, Jiwa redeemed himself with a goal line clearance to prevent UEA grabbing their equaliser before the referee blew the final whistle. Bouncing back from defeat to Loughborough, this 5-4 victory, inspired by a superb Rafa Rosa performance, was precisely the momentum-building victory they required.