Members of our music ensembles are taking a well-deserved rest after an extremely busy Christmas period. 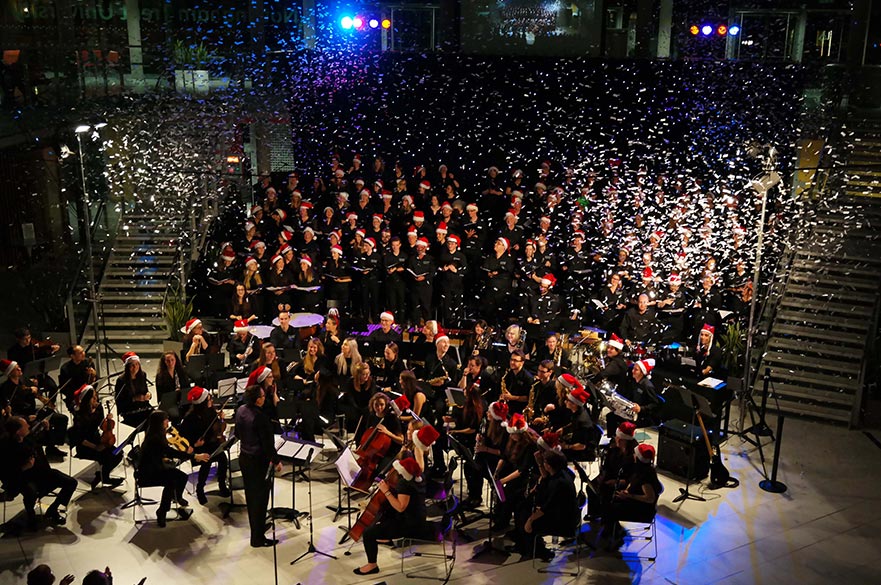 Members of our music ensembles are taking a well-deserved rest after an extremely busy Christmas period.

The festive period kicked off with a lunchtime concert in The Old Chemistry Theatre, featuring the NTU Chamber Choir and NTU Brass. Both ensembles also featured in a Live at Lunch concert a week later at Nottingham's Theatre Royal, in front of an audience of 500 people. It was a fantastic event - one audience member commented: "It was our first time to Live at Lunch and what a great first time it was. We're looking through the brochure to see when we can enjoy another performance - brilliant start to the festivities."

The Chamber Choir and NTU Choir then performed at NTU's Carol Service, which was held in All Saints' Church on Thursday 3 December. It was a beautiful service which began with the Chamber Choir singing Will Todd's My Lord Has Come from the back of the church. The service included readings from NTU students and staff, and concluded with mince pies and mulled wine – much to the delight of the choir!

NTU's popular Christmas Concert took place Central Court in Newton building and was a great way to celebrate a fantastic first term for NTU Music. The concert featured the NTU Choir and Chamber Choir, the Concert Band and Orchestra, NTU Brass, and NTU Drumline. It was a debut performance for the Drumline who started off the second half of the performance with an epic (and very loud!) opening sequence.  This led into the popular Highland Cathedral, featuring PhD Student Jens Roeser on the bagpipes, accompanied by the NTU Concert Band.

The concert was fantastically festive and the audience enjoyed the varied program, which also involved lots of audience participation! Highlights included vocal solos by first year students Cameron Walker, who sang When a Child is Born, accompanied by the NTU Choir and Concert Band, and Ella Josey who wowed the audience with He's a Tramp from Disney's Lady and the Tramp.

Second year students Beth Giddings and Jenny Patterson sang The Little Road to Bethlehem as a duet, showcasing their beautiful voices. The instrumentalist solos were equally as impressive, with Annah Morrish on trumpet and Chris Brown and James Newton on alto saxophone.

After such a positive first term, everyone at NTU Music is already looking forward to events taking place in the new year. If you would like to keep up to date with concerts and other events, connect with NTU Music on Facebook, Twitter or visit the Music events page.