Fintan Mulholland, who recently graduated from our MA Fashion Knitwear Design course, has been announced as the winner of the Fashion Emerging category in the Institute of Designers in Ireland (IDI) Irish Design Awards 2015. 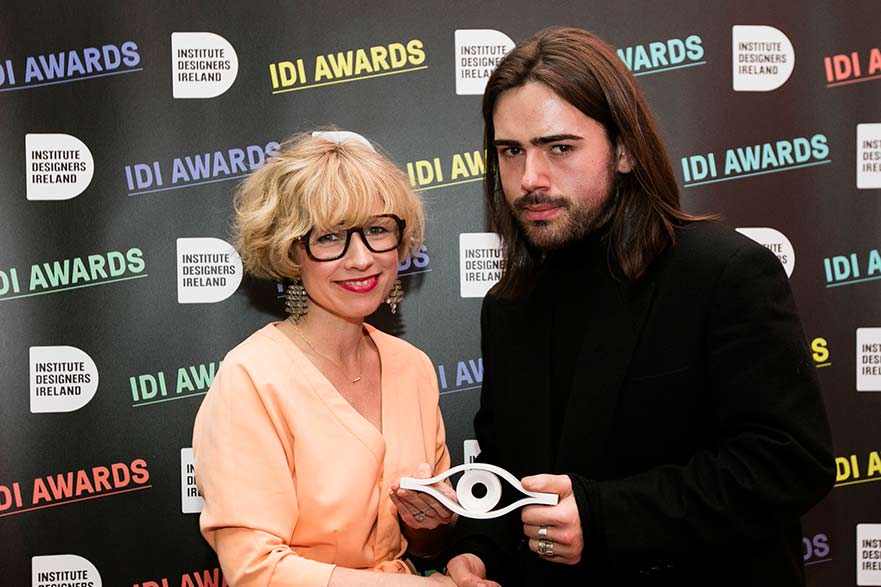 Fintan Mulholland, who recently graduated from our MA Fashion Knitwear Design course, has been announced as the winner of the Fashion Emerging category in the Institute of Designers in Ireland (IDI) Irish Design Awards 2015.

The competition was open to members of the IDI and the Design & Crafts Council for Ireland (DCCOI), and Fintan was one of 320 designers who submitted entries across the 25 different categories.

The awards are Ireland's only multidisciplinary professional design prizes and since the 1990s they have recognised excellence and innovation in creative practice.

The Fashion Emerging category that Fintan won was for ready-to-wear designs from a designer in business for less than three years. During the judging the jury were looking for ground-breaking techniques, use of fabrics, quality, functionality and overall craft. The work Fintan submitted, entitled NEPHILIM, was also commended in the Sustainable Design category.

Fintan describes his work as: "Exploring a range of techniques that enable me to sue the craft of knit to explore new forms taking the medium to its limits. I take inspiration from theories of prehistory through to representations of science fiction and aim to push an ancient craft to the limits of design with the use of modern techniques and technology."

Fintan was a recipient of one of the School of Art & Design's Paul Smith Scholarship and has recently been named as one of Fashion's 'People to watch in 2016' in The Irish Times by their Fashion Editor, Deirdre McQuillan.

Other successes from our MA Fashion Knitwear Design course this year include Gilles Werbrouck and Patrick Byrne.

Gilles was selected from hundreds of students to be part of Texprint, enabling him to show his work in London and at Indigo at Première Vision in Paris. He was also short-listed for the Texprint PATTERN Award and awarded a seven-week design internship in Como, Italy.

Following exhibitions of his master's work during the course at SPINEXPO in Shanghai and New York, Patrick was awarded a coveted pace on the Santoni Pioneer Program, a fully-funded eight-week scheme for 'new fashion talent to push the boundaries of circular knitting technology' at Santoni Shanghai.