The second cohort of the Dual LLM course were welcomed by the Dean of Nottingham Law School, arriving in Nottingham to begin the second leg of their degree. 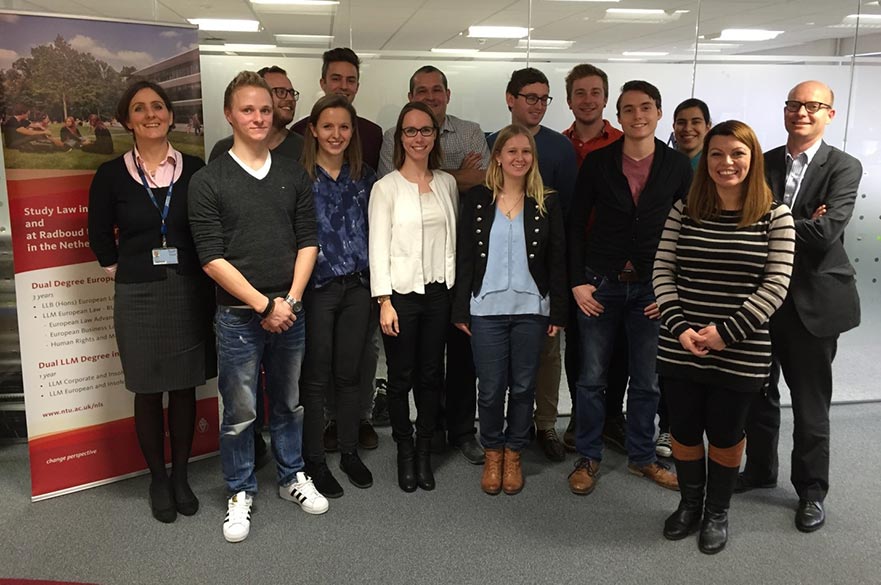 Students from the second cohort of the Dual LLM launched in September in Nijmegen, The Netherlands, have arrived in Nottingham to begin the second leg of their degree programme. This programme sees students graduate with two awards: an LLM in European Law from Radboud Universiteit Nijmegen and an LLM in Corporate and Insolvency Law from the Nottingham Law School. It is the result of a unique collaboration initiated between both Law Schools in September 2012.

The students attended induction, hosted by Professors Paul Omar (NLS) and Michael Veder (RUN) on 12 January 2016. Following a welcome by the Dean of the Law School, the students met with members of the Centre for Business and Insolvency Law and also had briefings on the content of the programme, in particular relating to expectations and preparation for the substantive courses, which start in the following weeks. They will be studying such subjects as Cross-Border Insolvency, Comparative Corporate Rescue as well as Business Structures and Insolvency in the EU.

Alongside their substantive courses, students have been following two all-year modules on Research Methodology and Comparative Law as well as a module on Workout Strategies. In the latter module, students have been working since the first term in Nijmegen through the problems of a typical cross-border corporate group experiencing financial difficulties, and will be suggesting solutions for the restructuring of the business and coordination of the international elements of the procedures based on information acquired in their substantive courses on European, commercial, corporate and insolvency laws.

Both Law Schools hope that the second cohort on this programme will continue the success of the first cohort, which saw a number of very strong results at distinction level. The Law Schools hope to build further on the close cooperation existing between the institutions, which has seen both teaching and research collaborations over the past few years.