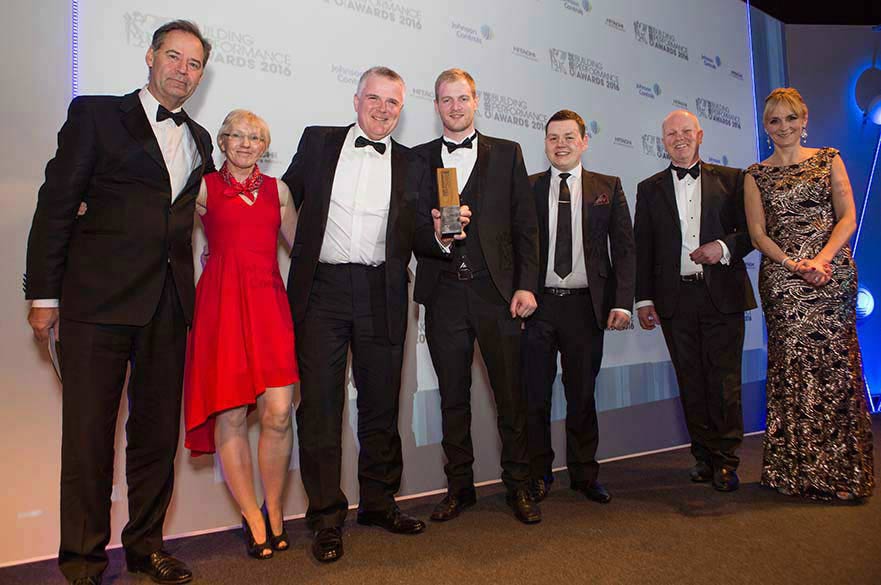 Collecting the CIBSE Project of the Year - Commercial / Industrial Award

The University is the winner of the Project of the Year – Commercial / Industrial Award for its refurbishment of the Grade II listed former council registry office building on Shakespeare Street in the city centre.

Originally built in 1887, the building sustained damage in World War II and had undergone several refurbishments prior to the University's acquisition in 2012.

The CIBSE Building Performance Awards recognise the people, products and projects that demonstrate engineering excellence in the built environment and focus on actual, measured performance, not design intent or performance specifications.

Stephen Jackson, Director of Commercial Development, Nottingham Trent University, said: "It is a tremendous achievement to receive a Building Performance Award for this period property. It is a great testament to the team responsible for transforming this building of Victorian construction into an energy efficient one that is fit for the 21st century.

"We have succeeded in restoring the building sympathetically, keeping its striking architecture and heritage both internally and externally, whilst at the same time turning it into a building that is fit to meet the demands of a modern working environment.

"We set ourselves the challenge of carrying out a full refurbishment of the property to minimise energy use and carbon emissions in line with the University's goal of reducing overall carbon emissions by 48% by 2020, and energy consumption is now 50% lower than if no works were carried out."

Nick Mead, President of CIBSE, added: "The most important thing about these awards is that they reward real and measured building performance, not promises and plans, which shows us who is making a real difference in fighting climate change."

Following a nine-month refurbishment, 50 Shakespeare Street opened in September 2014. A vast range of specialist expertise has ensured the building's original architecture and features have been retained and restored, whilst renewable energy solutions using sustainable procurement practices have been installed.

The building is now the home of the University Executive Team. It also boasts an impressive courtroom that provides a magnificent function room, a boardroom for use by University staff and visitors, and additional office space and meeting areas.

In November 2015, the University was joint winner of the Non-Domestic Retrofit Award in the Buildings & Energy Efficiency (BEE) Awards. The awards recognise projects and products that have made a real impact on reducing energy use in the built environment.