The Advocacy Cup is an annual inter-varsity advocacy competition in which Oxford oppose Cambridge and Leicester compete against UoN. After two exciting courtroom trials, Oxford and UoN were presented with the 2016 Advocacy Cup. 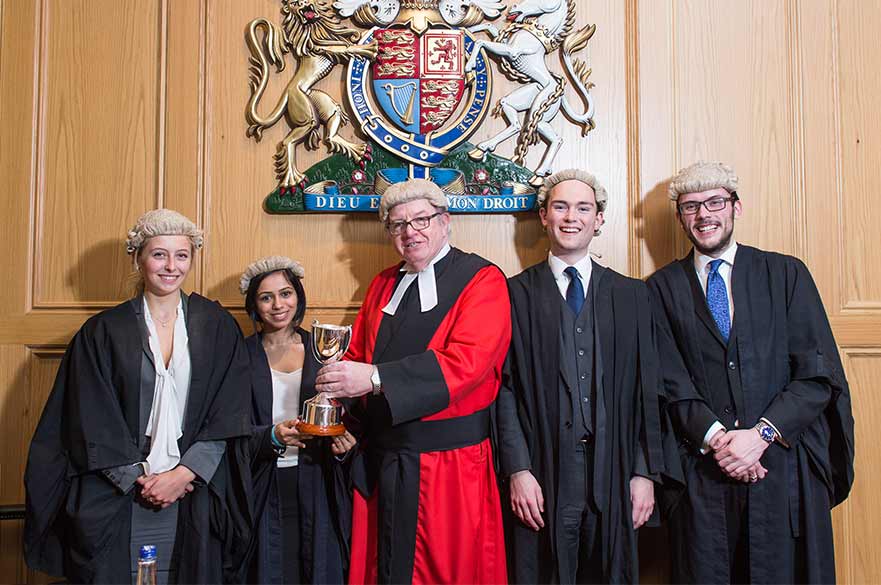 The Advocacy Cup is an inter-varsity trial advocacy competition devised and organised by Rob Manning, a senior lecturer on the LLM Bar Professional Training Course (BPTC) at Nottingham Law School. The event was held on Saturday 23 April 2016 in Nottingham Law School's purpose built court and was supported by 1 High Pavement Chambers and KCH Garden Square Chambers.

A team from Cambridge University (pictured in action) prosecuted a team from Oxford University in a mock jury trial taking place in the morning, whilst in the afternoon Nottingham University prosecuted Leicester. The teams were mentored by two senior criminal barristers from 1 High Pavement Chambers, Clive Stockwell and Gregor Purcell who both specialise in serious crime.

The standard was incredibly high and all of those that participated should be proud of themselves. Both trials were heard in front of a jury made up of current Nottingham Law School BPTC students who heard evidence from three live witnesses, all played by criminal barristers from Nottingham, about an incident that took place at a recent ABBA tribute concert!

The prosecution alleged that Dick Lucas, the defendant, punched another concert goer in the face, causing injury. The defendant maintained throughout the trial that the blow was in fact a slap delivered lawfully by way of preemptive strike whilst in fear of an imminent headbutt. He further disputed the evidence of a witness who claimed she heard the defendant say something incriminating prior to his arrest. The jury also had to grapple with another evidential conundrum in that the complainant said a small cut he sustained on his cheekbone was caused by the defendant’s ring however the defendant was not wearing one when arrested shortly after the incident.

The jury in trial one acquitted the defendant and the defence team from Oxford University were judged by HHJ Stokes QC to have won the encounter by the narrowest of margins. The result was reversed however in trial two when Lucas was convicted by the jury and the prosecuting team from Nottingham University were presented with the cup by HHJ Mukherjee.

Both judges commented on the very high standard of advocacy which continues to improve from year to year. The event was a tremendous learning opportunity for all involved not least the Nottingham Law School BPTC students who not only observed proceedings at close quarters from the unique perspective of the jury box, they had to consider the evidence presented to them and reach a verdict.