On the evening of Thursday 15 April Charlie Lea was named overall winner at the 2016 GDL mooting society competition finals. 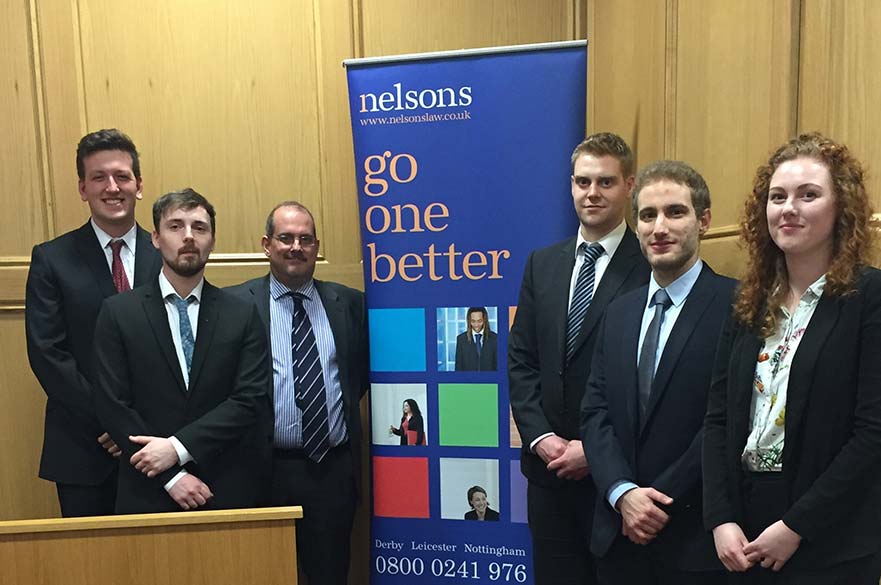 The final of the tenth annual Graduate Diploma in Law (GDL) Mooting Society Competition took place on Thursday 14 April 2016 in Nottingham Law School's Court Room 2. The Competition was well-supported by both the GDL student body and Law School staff. Each of the finalists had to succeed in two preliminary rounds as well as the semi-final to reach their place in the final. The rounds were rigorously judged by students on the Bar Professional Training Course and Legal Practice Course (LPC).

The final, which was sponsored by local law firm Nelsons, saw Panos Panayiotopoulos and Rhona Scullion appear for the Appellants, and Lewis Troughton and Charles Lea appear for the Respondents. The moot problem, which had been written by a previous GDL Mooting Committee (John Goss, Tom Heath and Eleanor Davies), concerned the division of beneficial interests in the family home following the breakdown of the parties' relationship. The finalists were also required to consider the application of the Trusts of Land and Appointment of Trustees act 1996.

The moot was conducted with great enthusiasm by all parties, and the mooters dealt with questions from the bench both skillfully and eloquently. As ever, the standard of mooting demonstrated by the students was extremely high. All parties presented their case with distinction and the scoring was extremely close, with only a few marks between the top and bottom scores. The overall winner was Charlie Lea. Charlie's prizes include a mini-pupillage at St Mary's Chambers.

Great thanks must go to Jon Roberts for his excellent and rigorous questioning of the mooters and for so kindly judging the moot once again. Jon has been a tremendous supporter of GDL mooting over the years and this year clocked up his seventh appearance on the bench; something that is greatly appreciated by all at the Law School. Thanks must also go to Nelsons for their generous sponsorship over the last ten years.

All the finalists are to be congratulated for their performances on the night. Special thanks are due to LPC students Alexandra Durling, Elliott Moulster and Ayomide Fagbemi (who make up the GDL Mooting Society Committee) and to GDL Mooting Tutor, Paula Moffatt, for organising such a successful competition and event.

The Committee would also like to thank all those who participated in the previous moots and the LPC and BPTC students who volunteered their time to judge throughout this competition. Without their contribution, the Society would not have been able to enjoy such a high level of mooting.