Nottingham Trent University leveled the varsity series against fierce rivals the University of Nottingham at one point apiece after a pulsating and dramatic 76-74 victory for the men’s basketball 1st team. 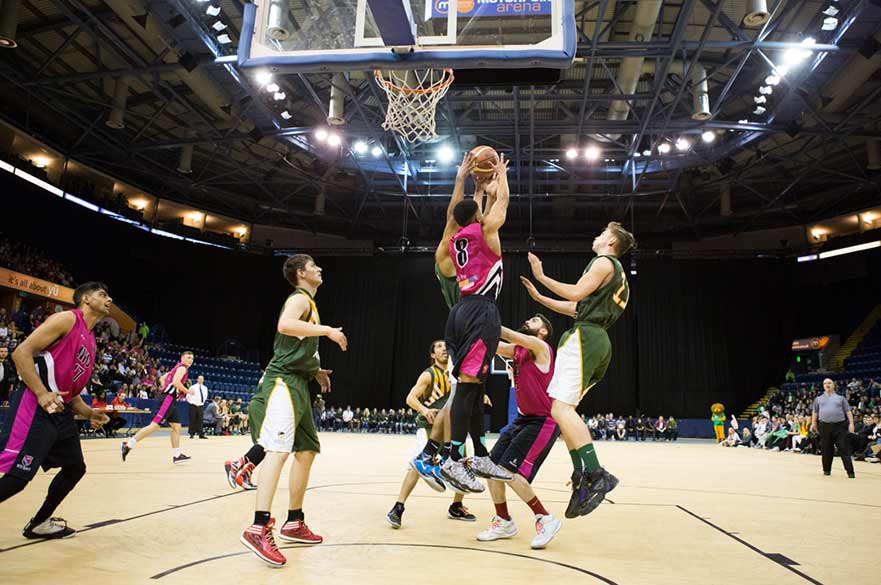 Nottingham Trent University levelled the Varsity series against fierce rivals, the University of Nottingham (UoN), at one point apiece after a pulsating 76-74 victory for the Men's Basketball Firsts Team. In a game that had huge drama throughout, including multiple lead changes in the final quarter, NTU eventually prevailed on the back of huge performances from Centre Izaak Williams and Point Guard Josh Monk who showcased his talent, tenacity and touches of class throughout.

NTU managed to banish memories of last year's 82-56 defeat at the hands of Nottingham University. This put NTU in a strong position to take home the Varsity trophy for the first time in six years after pulling off a surprising victory. The final quarter in particular will live long in my memory; with two and a half minutes to go, NTU were behind by four points, but after a 46-second explosion of action swung the momentum and contest in their favour. This game was everything Varsity is about: passion for your university, bringing people together and, above all, putting everything on the line to secure the victory for your team.

After the national anthem was belted out with vociferous pride, on the eve of St George's day, from players and fans alike, the opening tip was secured by UoN and a truly remarkable basketball contest was underway. In an intense atmosphere, both teams struggled to get into their normal patterns of play, and turnovers were a plenty in a very even first quarter.

The UoN nailed a couple of three-point baskets to take an early 14 to 10 lead, but the NTU defence was incredibly active and forced errors from the UoN team later in the quarter. Some fine ball handling skills were on show from NTU's starting point guard, Tomas Krivonosovas. This sparked a 12-4 run to end the period. A staggering full court pass and an effortless behind the back assist capped a fine start to the game for Krivonosovas and along with Izaak Williams six points and Josh Monk's seven, NTU led 22-18 at the end of the first quarter.

NTU's bench began the second quarter, but they started sluggishly turning the ball over on multiple occasions, the turnovers consequently led to fast breaks for UoN who capitalised and retook the lead 29-28 midway through the quarter. After the starters were reinserted into the game, Krivonosovas' phenomenal ball handling and dribbling abilities nullified the increased defensive intensity from UoN, leading to one beautifully constructed basket in particular for Jeevan Grewal to finish resoundingly.

NTU led 33-31 with three minutes left in the half and UoN were struggling to counter the stingy rear-guard that Grewal and Williams were erecting on the interior. However, UoN responded with three three pointers to reclaim the lead, their fourth, fifth and sixth of the half, compared to NTU's solitary bucket from downtown. After a breathless 20 minutes of action, NTU was unlucky to go into the locker room behind 40-38.The packed stadium was then treated to both Universities' cheerleader teams performing routines during the half time interval. Both acts were exuberant and incredibly well choreographed and seemed to be the perfect tonic before the second half drama.

The third quarter was incredibly physical, with the referee's seemingly blowing their whistles every other possession; one official in particular whistled and indicated what the foul was for with such flamboyance and gusto that his actions were entertaining in their own way. Josh Monk, who is renowned all over Nottingham as a sharpshooting sniper from range, showed his prowess off the dribble tonight, using crossovers and quick movements when defenders closed him down on the perimeter and scored a number of buckets from close range, particularly in the third quarter. NTU's rhythm was thrown off as a result of UoN enforcing a full court press to try and nullify Krivonosovas' wizardry with the ball in hand, and the offence staggered as a result. A slick passing move which cut through the press effortlessly ended the third quarter scoring, but NTU still found themselves down by three; with UoN leading 52-49.

A final 10 minutes of high intensity, effort and passion was left to be played at the Motorpoint Arena, and an engrossed crowd summoned their strength to chant, cheer and gasp throughout a climax few could have predicted.

After NTU took a 56-54 lead after a fine give and go play between Williams and Ryan Stewart, UoN stormed back and rode a 12-2 run to seemingly crush any chance of a NTU victory. NTU lost their poise in this period, with passes being dropped, rebounds lost, leaving many heads hanging in a timeout that coach called to try and regain their composure.

With four minutes left, NTU were down 58-66 after a corner three pointer had sent the UoN crowd into delirium and left the NTU supporters scratching their heads as to how this had slipped away so quickly. Within two minutes, these emotions had drifted from one side of the arena to the other, after a staggering 11-1 run from NTU seized the contest back in their favour. After Monk again confidently drove to the basket with all his might, and then hoisted the most beautiful three-point shot from the left corner, his favourite spot, on back to back possessions, Williams came up with a steal off the UoN inbounds pass and eventually put back a miss into the basket to give NTU a scarcely believable 70-67 lead.

The celebrations on the NTU bench and from the crowd makes the hairs on the back of my neck stand up as I type about them nearly 10 hours later such was the deafening nature of the outburst of noise. But the drama was yet to be concluded as UoN managed to tie the game at 70-70, and then again at 72-72 with 30 seconds left on the clock. Enter Josh Monk, whose fourth quarter play made me question whether the memory of last year's humbling kept him up awake at night in cold sweats and was driving inspiring play in the clutch moments in this year's thrilling finale. After nailing a 16 footer to put NTU back up 74-72, he then held his nerve to make two free throws to put NTU three ahead at 76-73. Grewal then missed two free throws to give UoN a chance to tie the game with the final shot, but it was fantastically contested by Krivonosovas and missed badly, bringing a thrilling game of basketball to a close.

Everyone played their part on the NTU team, with Krivonosovas claiming nine assists in the game and Grewal scoring 15 points, but in the biggest game of the season, NTU's two most influential players rose to the occasion. Williams, who finished with 25 points and eight rebounds, and Monk, who finished with 22 points and two steals, scored NTU's last 13 points and wrestled the game away from UoN and set the 2016 Varsity series alight.