Men's Football make it five years in a row with a spectacular Varsity win. 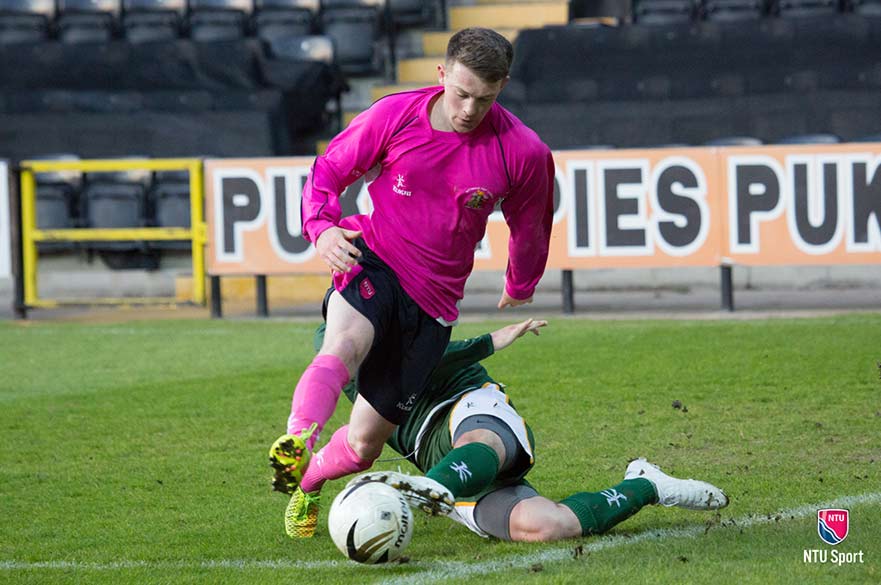 The men's team made it back-to-back wins after NTU's women beat UoN on penalties earlier in the day, edging the Varsity scores ever closer, with UoN holding an 8-6 aggregate lead.

It took less than a minute for the men in pink to take the lead, with striker Arel Amu breaking the deadlock at the first opportunity in emphatic style. Left back Connor Bartle channelled a ball down the left flank which picked out the big forward, and Amu flicked the ball over a defender before sending a delightful half volley into the top corner with his laces.

NTU stamped their authority on the midfield from the off. Jerry Nash pulled the proverbial strings of the game, Jonny Coates broke up play, and Joe Junkovic was a menace down the left flank. A throw sailed over goalkeeper Keval Patel, and winger Junkovic arrowed in an effort from the left side of the box in the 17th minute, doubling NTU's advantage.

Despite UoN coming strongly back into the game, Amu came close to scoring his second, the striker just failing to control a pinpoint, cross-field ball from Bartle in the area.

A minute before half time NTU bagged their third, again from range. Josh Rae curled in a right-footed effort from 20 yards over Patel, who should have done better this time.

After the break, UoN were the better of the sides and looked threatening; full-back Matt Lane, in particular, produced a number of dangerous balls into the box, but which failed to pick out a man.

NTU keeper Harrison Fernandez-Lewis was made to work shortly before the hour mark, stopping an effort with his legs after Bartle's slip was capitalised on by the opposing right winger.

Despite increasing pressure from UoN, Junkovic stung the palms of Patel from range, assisted by Rae, but UoN got the goal they deserved in the 69th minute. Shonde turned the ball into the roof of the net following a melee in the penalty area, following James Bessey-Saldanha's ball in. The goal proved no more than a consolation for UoN and the last of the game, although Amu missed a glorious opportunity to add a fourth in stoppage time.

Speaking after the game, defender Connor Bartle admitted it was a good first-half performance and NTU slacked-off in the second – but they knew the game was won by half time.

"It was a quick start within the first 30 seconds. Every lad put 100% in. I think we only made one sub, and did a great job.

"It was disappointing to concede the goal, but to only concede one was all right," he said.

Joe Junkovic said it was the shape of the team and work rate of the players which was vital – and that he didn't think his shot was going in when he hit it.

"I thought it was going to go over, to be fair, but it just dipped in. I think it was a lucky goal, let's call it that – I'm modest," he added.

To keep up to date with all the latest fixtures and results, follow NTU Sport on Twitter.

View all the photos from the game by visiting our Facebook pages.

Men's Football make it five years in a row with a spectacular Varsity win.