First year Theatre Design student Rebecca Constable has won the top award at the Young Creative Awards 2016, being named the Nottingham Young Creative of the Year 2016 for her creative writing piece. 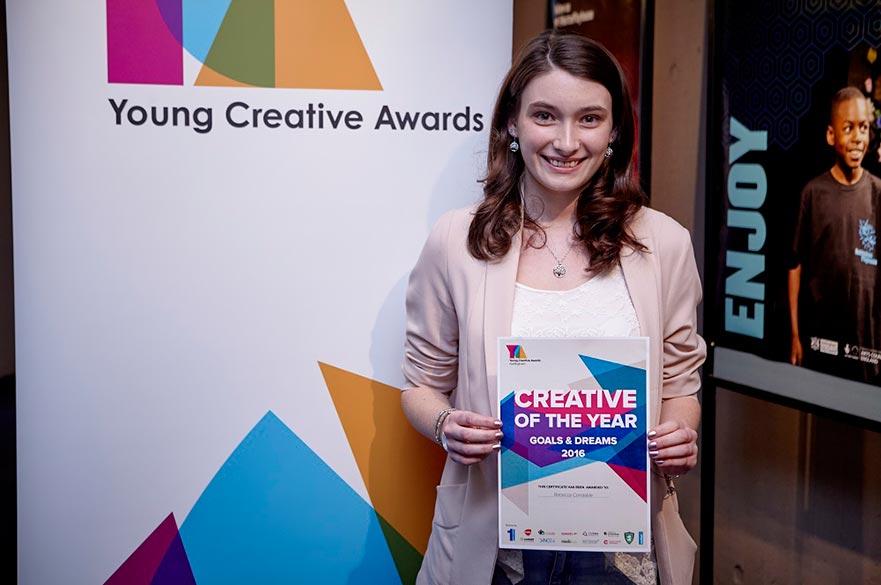 First year BA (Hons) Theatre Design student Rebecca Constable has won the top award at the Young Creative Awards 2016, being named the Nottingham Young Creative of the Year 2016 for her creative writing piece. BAFTA award-winning local actress Vicky McClure presented Rebecca with her award in front of a packed audience at Nottingham Playhouse.

This was a record year for entries to the awards with over 350 young creatives submitting work in ten different categories to meet the brief of 'Goals and Dreams'.

Rebecca's winning creative writing entry is an aspirational story about the struggle to overcome dyslexia and achieve the goal of a place at university. She wrote the piece with the hope that her short story can help raise awareness of what dyslexia is, and of the personal impact teachers and students have on their pupils and classmates.

I can't describe how shocking and exciting it was to hear my name called out, not once but twice!

Speaking after receiving the award, Rebecca said: "I can't describe how shocking and exciting it was to hear my name called out, not once but twice. I cannot tell you how important it is to me to share this story, as many children and adults today are labelled as lazy or dumb and don't receive the support they need. This needs to change, and teachers need to be more aware of the impact of dyslexia."

Theatre Design course leader Andrea Moneta commented: "Creative writing holds a very important role in the Theatre Design practice and we're delighted that Rebecca has won such a prestigious award for her wonderful and emotive story.

"Writing, as well reading, allows the designer to develop a sensitivity towards the visible and invisible signs of the world, and to explore people and places - a crucial process to grasp the essence and the meanings of a play for its reinterpretation in a new art form."

NTU students showed off their talents in the Film category with a group project entered by Emily Deck and Chantelle Woodward, both FdA Media Creatives students, winning the 19-24 age range. Their team's film reflects the goals and dreams they have for Nottingham and the people of Nottingham. Reece Straw, Fine Art student, was also highly commended for his first film, which documents the story of Val, a local community hero. The film is intended to act as a legacy for Val's children, grandchildren, and the community as a whole.

The accolades didn't stop there for NTU with two alumni scooping prizes: Kim Watson winning the Photography, 19-24 award and Natalie Owen being highly commended in the Creative Writing, 19-24 category.

The awards are in their eighth year and are fast becoming one of the most exciting events in Nottingham's creative calendar, as well as an established route for local young creatives to take their first step into the creative industries. The School of Art & Design sponsored the Graphic Design category, and has been sponsoring the awards since their inception in 2009. In addition to a cash prize, Graphic Design winners were offered a valuable place on one of our Creative Short Courses in order to support their creative skills development.

There will be a special feature show about the competition on Notts TV, on Sunday 5 June at 7.30 pm.