NTU Students get the England call up

Nottingham Trent University is celebrating the success of its Rugby Union programme after four students are selected to wear the England rose. 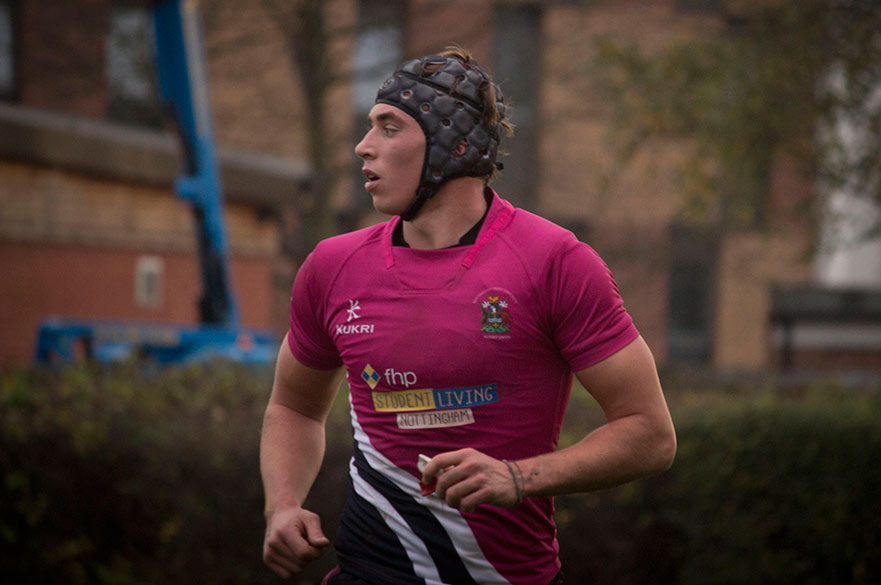 Nottingham Trent University is celebrating the success of its rugby union programme after four students are selected to wear the England rose.

First to receive the news was first year Real Estate student Alex Goble. Alex joined the rugby union performance squad in September, and has since become a valuable asset to the men's first XV. His performances on the NTU field also led to his selection for the Nottingham Rugby Academy.

NTU quickly noticed Alex's talent and began to provide the support needed in order for him to reach his full potential. This support enabled him to manage both his studies and the training and playing programme for NTU and Nottingham Academy, whilst also pursuing his progression into England Counties through the NLD (Notts, Lincs and Derby) and the Midlands Counties U20 groups.

It was through this pathway that he was then selected to represent England Counties at U20 level. Alex will gain his first taste of rugby on an international level when he joins the rest of the squad on their tour of Russia in June 2016.

Alex told us of his excitement: "It's a great honour to be selected for England Counties U20. It will be a great opportunity to go on tour to Russia and show the coaches and opposition what I can bring to the team."

Head Coach of England Counties U20, Paul Arnold, told us: "This is a great opportunity for players to come up against an emerging nation in Rugby Union. We have selected players from an extremely strong wealth of talent and it is a testament to each squad member that they've made it into the final squad. I would like to credit NTU for playing such a vital role in the development of Alex as a player. The University's set-up is a clear pathway for emerging talent, especially for those who may have slipped through the net at academy level."

Also stepping into the limelight are NTU Sport Scholars Callum Hall, Josh Poullet, and Alex Smit. Callum, Josh and Alex have been invited to the upcoming England Students training camp, where they will train and play alongside the best student players in the UK. The camp highlights will include a warm-up game against England U20 as they prepare for their 2016 World Cup campaign.

Showcasing their talents both as NTU Men's first XV players and also in the Nottingham Rugby first team, Callum, Josh and Alex are prime examples of what the partnership with Nottingham Rugby can achieve. Now in its fourth year and moving from strength to strength, the partnership with the Greene King Championship club ensures high-level players coming into the University can achieve their best both on and off the field.

Managed by NTU's Head of Rugby and Nottingham Rugby forwards coach Neil Fowkes, the programme allows players to continue with their education whilst also offering pathways into the professional set-up. NTU Sport currently has ten scholars under contract and seven in Nottingham Rugby's academy. Out of the new intake in September, it is hoped that more NTU players will have the opportunity to represent the Nottingham Academy, with the selection day on the 12th June 2016.

Speaking to Neil Fowkes upon the student's selection, he said: "All four players have excelled within NTU's programme, and are beginning to make their mark within Nottingham Rugby's first team and academy set-ups. These selections are a culmination of their hard work and dedication throughout this season. The players are a great example of the success that can be achieved through careful management of both their academic and playing commitments."

Nottingham Rugby's General Manager, Steve Smith, was quick to praise the boys upon hearing the news: "It's a great opportunity for these four players within the England Squads, and we are extremely pleased with their development. We look forward to seeing them make an impact in the upcoming games for England. The link between NTU and Nottingham Academy is something we want to continue to develop, and we are starting to see the long-term benefits of our partnership.

Nottingham Trent University would like to wish all four students the best of luck in their upcoming competitions.

To keep up to date on all news and events from NTU Sport, follow us on Twitter.

NTU Students get the England call up