A student whose brother underwent MRI scans after developing concussion twice while playing rugby has designed a wearable device which warns referees if a player needs to be medically examined. 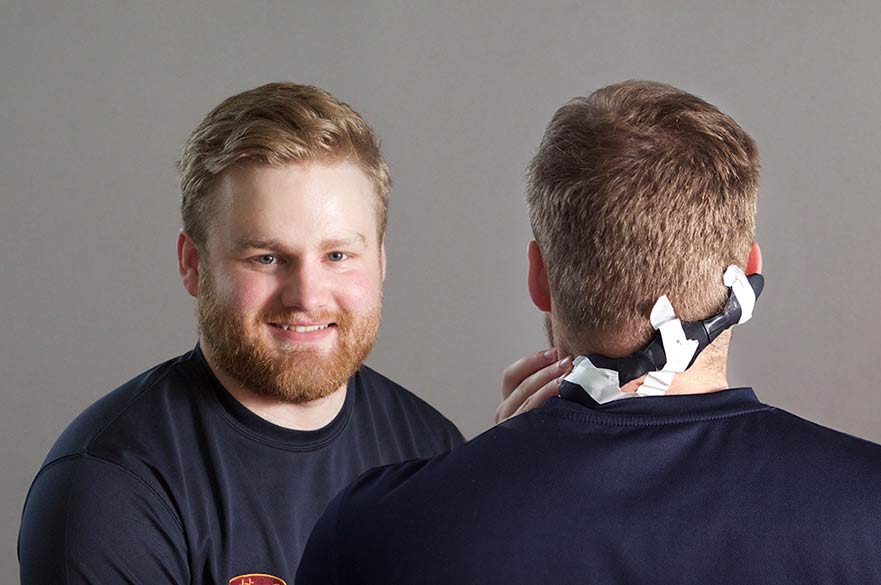 George Russell with his design

A student whose brother underwent MRI scans after developing concussion twice while playing rugby has designed a wearable device which warns referees if a player needs to be medically examined.

George Russell, 21, who's studying BSc Product Design at Nottingham Trent University, says his design would prevent players carrying on in the heat of battle after suffering a dangerous knock to the head.

"Concussion never used to be talked about in rugby, but now it's one of the hottest topics of the game and some say even threatens the future of the sport," said George, a keen rugby player himself, from Welwyn Garden City in Hertfordshire.

"The problem is that players often continue playing a match with concussion, and it's dangerous for someone with that sort of injury to get a further blow to the head.

"What my product does is alert an official when someone has a knock which may cause concussion, so the match can be stopped and a medic check the player over."

The device is worn on the back of a player's head and is strapped to his ears so it would not affect his ability to play the game. The technology centres on the use of an accelerometer gyroscope chip inside the device which tracks a player's head movements and would sense the kind of violent impact which is likely to cause a concussion.

"When my brother, Duncan, had to undergo MRI scans after being concussed, it was a worry," said George.

"The scans were done as a precaution and he turned out to be fine. But when you see professional rugby players having to give up their careers because of head injuries, it makes you think.

"Concussion isn't something that players take lightly anymore. It can lead to mental health problems, memory loss, depression, mood swings and punch-drunk syndrome, which can be chronic. At worst it can be fatal.

"I've spoken to other rugby players as part of my research and they all agreed that wearing such a device wouldn't change their game.

"By using modern technology, there's no reason why we can't mitigate against the risk and allow people to continue enjoying rugby while lowering the chance of life-changing injuries."

George's design went on show for Nottingham Trent University's 2016 Degree Show. The show was one of the largest collections of graduating art and design talent in the UK, with more than 1,300 works on public display.

"It's a great illustration of how design can improve lives by creating a safer way to take part in rugby without compromising everyone's enjoyment of the game."